Share All sharing options for: Kings Gameday: Frolov on a Checking Line?

Do me a favor: reach into my pants. No, in the front. Do you feel that? No, that's my phone. Left. Yeah, right there. That's a boner. That's what Frolov playing defense does to me. Hey, shut up, we can't all be Dustin Brown. You know what, forget it, just get out of there.

The point is, I'm very excited by this pronouncement by Terry Murray that Alex Frolov will skate with Michal Handzus on the prime defensive line for the Kings. The traditional NHL line is that you have to have 2 scoring lines, a checking line and then a goon line. Look at the Ducks for an example of this and see how well this works. The reality, however, is that guys aren't either good at offense or good at defense; guys can be good at both and they can suck at both. There are guys like Sammy Pahlsson, who's great at defense but couldn't score if you put a passed out coed in his hotel room, but most of the time the top defensive unit is populated by failed offenisve talents like Kyle Calder. Alex Frolov is a talented offensive player but he's also the best defensive forward on the team. He's good not only at positional defense and stripping the puck, but he's also great at protecting the puck in the offensive zone and keeping the puck away from the opposing team. A guy like Ryan Getzlaf or Olli Jokinen can't do much damage if they don't have the puck. Placing Frolov against top offensive guys will definitely help the Kings. 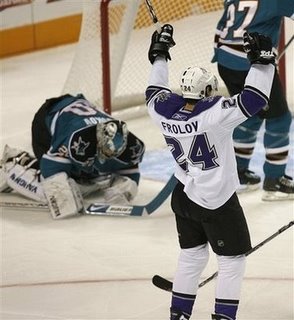 
What does this mean for Frolov? Well, it means his +/- might take a little hit and he might not score quite as many points, but overall it'll make him a better player and it'll help the team. I imagine the Kings will move Matt Moulson down to the Frolov-Handzus line when Patrick O'Sullivan is ready to go, or move O'Sullivan to that line to create an ultimate offensive-checking unit. That would definitely put me at full mast.


The Kings are playing Carolina tonight in an important grudge match. Nah, just kidding, I don't think either side really cares. But hey, Tim Gleason! I liked Tim Gleason when he was on the Kings and he's done well for Carolina. Still, his face is squishy and I hope Dustin Brown buries him tonight.

Prediction: Kings win, 4-2. Goals by Frolov, Handzus, Moulson and Doughty. Eric Staal's eyes will be too close together.