Kings Gameday: Reunited and it Feels So Good

Share All sharing options for: Kings Gameday: Reunited and it Feels So Good

Patrick O'Sullivan will skate with Dustin Brown and Anze Kopitar tonight, reuniting the Sandman Line* that was so effective in the 2nd half of last season. It's all well and good for those three because they love playing with one another, but the question I have is: why? Kopitar, Brown, and O'Sullivan are all playing over 18 minutes a game and they're all averaging about a point a game on separate lines. Kopitar and Brown have been effective though somewhat smothered by opposing defenses, while O'Sullivan has been the driving force on the third line** alongside Jarret Stoll and Oscar Moller. It seems like this is a move designed to end Kopitar's perceived struggles, but at the expense of the Kings' newfound offensive depth. 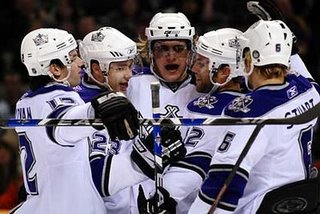 *I call them the Sandman Line because they put opponents to sleep. Actually, it's because they all look really tired.

**Can we end the whole charade that Alex Frolov is on the third line? He and Handzus are playing the 3rd and 4th minutes on the team among forwards. They're playing against the other teams top lines. And they're doing awesome. They're not the 3rd line.

There were a few more shifts in the line-up worth mentioning. Well, they're not, but I'm going to anyway. Kyle Calder has joined Jarret Stoll (I keep writing "Stool" instead) and Oscar Moller on the 3rd line. It'll be interesting to see how this line does: will Stoll and Moller be able to create offense on their own, or will Calder drag them down? The answers are, in order, "no" and "yes."

Matt Moulson also rejoins the lineup tonight in place of Brad Richardson. The move is designed to provide a little defensive responsibility. Of course, the defensive problem on that line is not Richardson but instead Ivanans and Armstrong. I dont' know why the Kings don't sit Ivanans for a game because he's been sucking and not fighting lately, but who the hell knows. I think Richardon, Boyle and Moulson should all play one game, just to see how the Kings do with 4 legit lines. Oh well. No one really cares, I guess. Hey look, a duck.

The Vancouver Luongos come into town tonight, led by their resolute captain. A lot of people made a big deal out of Luongo being named captain, but why the fuck not? He's their best player, he's probably the best athlete on the team, and he's a pretty outgoing guy. It's not like the past where goalies were dangerous lunatics that couldn't be reasoned with. As a goaltender myself, I am tired of the blatant stereotypes perpetuated upon my race. If a black man can become president, a goalie can become captain. Now that's change I can believe in.

Prediction: Kings win, 3-2. Goals by O'Sullivan, Kopitar, and Brown. Well, they better score, anyway; it's not like anyone else is going to now.