Kings Gameday: This is Awkward

Share All sharing options for: Kings Gameday: This is Awkward

Whenever the Kings play the St. Louis Blues I always get uncomfortable. I liked Andy Murray when he was the coach of the Kings, crazy tests notwithstanding, but it gives me a weird vibe every time I see him. It's like when you see an old high school teacher that you thought was cool but now the whole relationship between the two of you has been changed and neither one knows how to act. So you just kind of fumble a hello and then awkwardly explain why the dreams you had in high school are long since dead and they just kind of look at you with that weird cross between wonderment and bewilderment. I don't like it and I just wish it would be over. 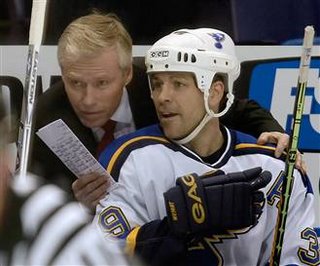 No, Mr. Murray, I'm actually writing a hockey blog... hey, why are you crying?


The Blues are off to a nice little start, led by Paul Kariya, Keith Tkachuk, Andy MacDonald, and Brad Boyes... wait, what the hell? They're going to tail off, right? There's absolutely no way a playoff team can be led by those 4 doofuses. Anyway, the Blues have been outstanding thus far on the power play, leading the league with a conversion percentage of 40.7%. That's obviously unsustainable, but neither is the Kings' 100% penalty kill so it'll be interesting to see which one breaks first. 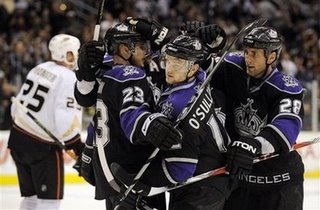 The Kings are shuffling up their lines a little bit, skating Kyle Calder alongside Kopitar and Brown for about 12 minutes a game. I really like the way Terry Murray has been using Patrick O'Sullivan. O'Sullivan is skating with Oscar Moller and Jarret Stoll and is doing a good job of driving that line until Jarret Stoll takes a stupid hooking penalty. On top of that, O'Sullivan is taking 4 or 5 shifts a game with Kopitar/Brown, usually in the third, when the Kings need a little extra push. The result is almost 19 minutes a game for O'Sullivan, in line with Dustin Brown and Alexander Frolov.

Prediction: Kings win, 4-3. Goals by O'Sullivan, Frolov, Brown and Stoll. Jack and Erik Johnson share a beer and talk about what the hell just happened to their seasons.