Umm, you know when I said this in my training camp preview:


Jonathan Quick isn't really a competitor [for the back-up job], I just figured his parents might scan this and see his name added and feel better. I'm a giver.

Uh, I was just kidding when I wrote that. I always knew Quick was going to make the team. Whoops. Seriously, though, he must be lighting camp on fire to potentially beat out Erik Ersberg for the backup goaltending job. The kid is only 22 but he played well in the ECHL and really stepped up his game to lead the Monarchs to the playoffs down the stretch last season. Then they benched him because Jonathan Bernier became available. With Bernier unavailable now because of a lower body injury, it's good to see Quick once again push himself into a higher position. He's the most unheralded of all Kings' goaltending prospects, but he might end up being the best. 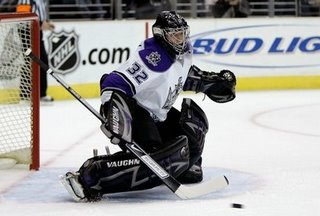 Now he just needs to change his number, since that one's retired.

On the defensive side of things, Jack Johnson has continued to play with Matt Greene and those two should combine to take a lot of bad penalties. Sean O'Donnell has been playing with Drew Doughty (at least I got that one right) and it seems that Doughty is going to get pretty big minutes, like 18 minutes a game or so. I had thought the Kings would start him off as a 6th defenseman, but then again I thought the Angels were going to beat the Red Sox so what the hell do I know?* Tom Preissing has been playing with Denis Gauthier and it looks like Peter Harrold will be the 7th defenseman because Preissing needs a big, strong man to take care of him. He's like a prison bitch. Thomas Hickey and Alec Martinez are also options but think the Kings will want them getting more minutes in Seattle and Manchester, respectively.


*That Angels-Red Sox series reminds me of the Hector-Achilles fight in Troy. You know going in that Achilles is going to win, but then the movie spends its entire first half establishing that Hector is awesome so you start thinking that he may have a chance. Then the fight actually starts and you realize no, he's fucked. The entire regular season was like the first part of that movie; the Angels pitched, played defense and had Vlad and Mark Teixeira and you started thinking, 'Wow, these guys are great, no one is going to beat them.' Then the Red Sox comes in and dances around them before stabbing them in the chest and dragging their bodies back to their camp.


Probably the biggest surprise offensively is the rise of Ted Purcell in the absence of Patrick O'Sullivan. I had figured coach Terry Murray wouldn't put Purcell up on a top line because Purcell is more of a set-up man, but Murray had a good quote in the Times about Purcell when he said, "Good players need to play with good players." This may end up working out whenever O'Sullivan gets back; if Purcell can stick with the two big boys then O'Sullivan can drive another line and make the Kings a better team. You know, if he ever signs.

It looks like Matt Moulson is going to skate with Alex Frolov and Jarret Stoll, which is a great line. Not only does it have Frolov and two guys that can really shoot, but those three are probably are the best defensive players on the team and should skate against another team's top line. Wayne Simmonds is going to stick on the third line with Handzus and Richardson, while Boyle is going to center Armstrong and Ivanans. I cannot tell you how much I love those lines. If they get O'Sullivan back and he takes Simmonds' spot and eventually Moulson's, the Kings have the best forward core in the Pacific. Honest.

Of course, this is all based on camp reports and lines for this weekend's games, so things could change and I'll right another 1,000 words about it. I have to admit, I'm looking pretty good in my predictions at the beginning of camp. I didn't know O'Sullivan would hold out this long so it kind of skewed my forwards, but overall I think I did a great job. You should congratulate me in the comments, I need the boost.