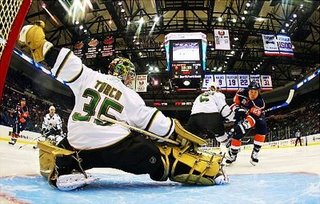 
It's been a rough start to the season for the Dallas Stars and no one is feeling the brunt more than Marty Turco. Many thought that this would be a big year for Turco considering the departure of more than capable backup turned beleaguered starter Mike Smith and the exorcising of many a playoff demon.

That has not been the case, so the Stars are calling in Andy Moog to try to work out the kinks.

*Kill me. Don't think about it, just murder me.

In nine games, Turco managed three wins and six loses (four in regulation). He's had a save percentage of 90 percent twice with one other game over 85 percent. He had three games in the low-80s and three disastrous games in which his save percentage was in the 70s.

So, looking inside the numbers 2/3 of Turco's starts would have really pissed off John Tortorella with a couple fitting in the ex-Lightning coach's disdainful 75% club. The season is young, but this is a large enough sample to at least generate concern. Not panic, mind you, but a generous helping of concern.

The Kings need a prayer. The Ducks need to continue revitalizing their offense and to stop taking moronic penalties. The Sharks need to keep it up.

The Stars? They need to play better defense, but more than anything else, they need their all-world goaltender back. Maybe Moog can find him.