Parallelism: The post-lockout ascents of the Ducks and the Sharks

Share All sharing options for: Parallelism: The post-lockout ascents of the Ducks and the Sharks

Nothing too new in this post, but I figured I'd make a quick chart to show the parallel paths between the Anaheim Ducks and the San Jose Sharks since the lockout. I normally would have put this in tomorrow's game day post, but we've got other plans afoot (I know, wtf? Plans and BoC? Crazy).

I didn't label the x-axis, but it would number 1-82 three times across this chart, for the three seasons played since the lockout. As noted below the chart, the red line represents the difference in the three year cumulative points total; the blue line resets at zero at the start of each new regular season. 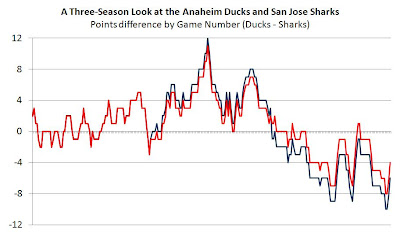 There's not too much to take away from this chart, other than what Ducks fans and Sharks fans have known for a while -- it's been damn tough for one of these teams to pull too far away from the other. In 2005-06, both teams stayed neck-and-neck throughout the entire year, in 2006-07 the Ducks pulled ahead at the start of the season, and in 2007-08 the Sharks pulled ahead early. Even with those last two seasons, though, it's remarkable how much of the time the two teams have been within 8 standings points of each other (and there's never been more than 12 points separation).

At any rate, it's post-lockout Year Four starting tomorrow with a good ol' Ducks at Sharks matchup, and if you look at the cumulative points totals since the lockout, the Sharks have earned four more standings points than the Ducks have. It's remarkable that these teams have mirrored each other so closely on the standings board, especially since they seem to have been built around different strengths -- the Ducks have built primarily around their blueline while the Sharks have built primarily around their forwards.

It's tough to say what this coming year holds for both teams, and I doubt anything gets definitively answered in tomorrow's game, but it's one thing I'll certainly be paying attention to this year. The Ducks and Sharks finished one point apart in 05-06, three points apart in 06-07, and six points apart in 07-08; anyone care to speculate how many points will separate the two teams after game 82 this year?