Rich Hammond is reporting that Patrick O'Sullivan has signed a three-year deal. No word on numbers yet. 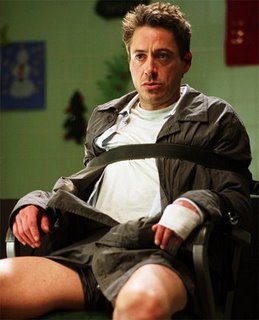 "I shot him with a small revolver I keep near my balls."


I'm starting to wonder if Oscar Moller is being treated like Robert Downey, Jr.'s character in Kiss Kiss, Bang Bang. In the movie, Downey is brought to LA and shown off at a lot of parties by a movie producer to bring down the number on Colin Farrell. The same thing may be happening here. I think the Kings are hoping Ted Purcell and Patrick O'Sullivan see Oscar Moller taking their spots and start working a little harder to improve their game. Then, after 10 games, Moller can go down to Junior feeling better about himself and Purcell and O'Sullivan can join the team properly motivated. Is it a crazy theory? Yeah. Hey, you don't pay for this stuff, pipe down.

The numbers average out to $2.95 million dollars a season over 3 years but will pay him $4 million this year to help the Kings out with their cash budget.

I mean, I always hope that the term will be a little longer but overall this is pretty great. The Kings get 3 solid years of Patrick O'Sullivan up through his age 26 season. O'Sullivan gets paid and the Kings get a good deal to see how the team shakes out. By the time O'Sullivan's deal is up, guys like Doughty, Moller and Simmonds will be up as well. Some people may think that's a bad idea, but I actually prefer because it allows the GM to make decisions all at once and not get cornered by previous deals.

I don't know when O'Sullivan will be in game shape or on what line he'll play on, but hopefully he'll be ready to go sooner rather than later. He gives the Kings a lot of different options because he can play all three positions and can line up on the power play and penalty kill. I imagine the Kings will work him in slowly and then replace Moller with O'Sullivan when Moller has to go back to Junior. Not to toot my own horn, but I said before camp that I liked a Moulson-Kopitar-Brown line with a Frolov-Stoll-O'Sullivan line, and it seems we might get just that. Toot.