Patty's Back, Dustin's Sportin' a C and Zatkoff's a Californian

Share All sharing options for: Patty's Back, Dustin's Sportin' a C and Zatkoff's a Californian

(Scroll down past this post if you want to see one of Earl's crazy charts. Yeah, I wouldn't either.)

I was lying in bed trying to think of how I'd integrate Patrick O'Sullivan back into the lineup and I came up with this:

The first game, I'd bench him. I'd take him to my office and explain that there are 22 other guys in the locker room that worked hard the past 2 weeks to get a chance to play in the NHL and I was going to reward him for that. Plus, he's still a little out of game shape and I don't want him getting hurt.

The second game, I'd suit him up. I'd let his name get announced in front of the Staples Center crowd and let him experience a big ovation to let him know that the fans welcome him back and everything's okay. I'd only play him maybe 4 or 5 minutes, though, and scratch Ivanans. Let Calder skate on the 4th line and use Patty sparingly.

I'd sit him the 3rd game against Anaheim so he can work on his conditioning and then play him against Carolina, this time on the 3rd line in Brad Richardson's place. Let him slowly work his way up like he did last year and give him a little penalty kill time if he's earned it.

He will probably be feeling pretty good by this point so I'd let him play in the Kings' 5th game and then one of the back-to-back games that weekend. I'd keep him in the same role and encourage him to prove that he belongs in a scoring role again.

That next week the Kings have their 8th, 9th, and 10th games of the season and I would expect O'Sullivan should be back in game shape. At that point I'd make a decision on Oscar Moller; if he's ready for a full NHL season I'd put O'Sullivan up with Kopitar and Brown and put Matt Moulson with Richardson/Simmonds and Handzus, and if he's not then I'd send him down and skate O'Sullivan-Stoll-Frolov. Either way, I'm ready to roll two good scoring lines and Patrick O'Sullivan is back and ready to rock.

What do you guys think? Should the Kings "punish" O'Sullivan for holding out? Should they give him his old job back? Should I get a hobby? Let everyone know in the comments.


Dustin Brown is the new captain of the Los Angeles Kings. He's the 12th captain in Kings' history, 13th if you want to count Blake's two stints separately. Take a look at the past few captains:

Those are some big shoes to fill, but I think Brown is a good guy and should be able to fill them easily. It's going to be fun watching him for at least the next 6 years. 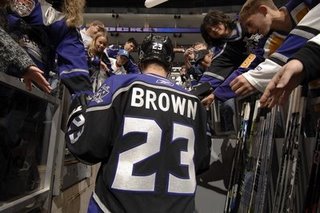 Anze Kopitar and Matt Greene were named assistant captains. Kopitar was expected because he's definitely the on-ice leader of the team but Greene is a little bit of a surprise. He's supposed to be pretty funny so maybe he's assuming goof duties from now on. One thing I like is that the Kings didn't pick any veteran for a leadership role. I think if they had picked one of Jarrett Stoll, Sean O'Donnell, Michal Handzus or Alex Frolov it would have sent a message that the others weren't worthy. By picking all younger guys the Kings are giving the veterans in the room a message where the Kings are headed and what is expected of them as old guys. That doesn't really make sense I'm too lazy to change it. It's gonzo blogging! 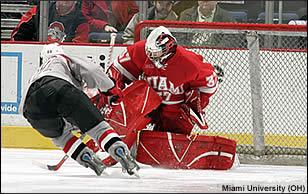 Jeff Zatkoff has been sent down to the Ontario Reign to assume goaltending duties. We'd all like to see a Bernier/Zatkoff duo curbstomp the competition in Manchester, but this is good for a few reasons:

-This will probably allow both Zatkoff and Bernier an opportunity to experience a full professional season. Zatkoff's career high games played is 36 and Bernier's is 54. Placing both of them in a unchallenged starter's role will allow them to adjust to the grueling minor league schedule.

-This gives the Kings options if either Labarbera or Ersberg get hurt. If one of the two were to get hurt a few hours before the game, the Kings can just call up Jeff Zatkoff as an emergency fill-in. No more will the Kings undergo travesties like last season, when Jonathan Quick had to fly between Reading to start and Los Angeles to back up Erik Ersberg.

-I get to watch Zatkoff play. I plan on going to a Reign game or two and I don't want to root for some fat oaf. Now the Kings just need to assign Wayne Simmonds, Alec Martinez and Anze Kopitar to Ontario and I'll be all set. Also, when Ontario scores, are they going to play "Make it Rain" by Fat Joe? I would chuckle.

It will be interesting to see how the Kings handle the other goaltenders in the pipeline. It's been made clear that Jonathan Bernier, Jeff Zatkoff and Jonathan Quick are the three stars of the goaltending group and Daniel Taylor, for whatever reason, does not belong. Do the Kings keep Taylor in Manchester and give Bernier most of the starts, or do they let Quick and Bernier share responsibilities in Manchester and place Taylor in Ontario or Reading?* It's something you can watch for, or at least forget about until I remind you in a few days. The things I do for you people.

*I guess the Kings are still affiliated with the Royals in that they can send players down if they're wanted. I imagine they wouldn't mind having one of our goaltenders.