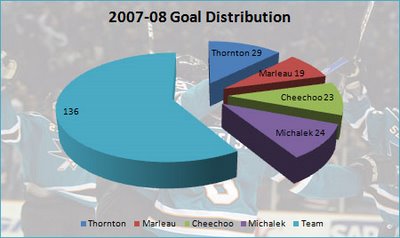 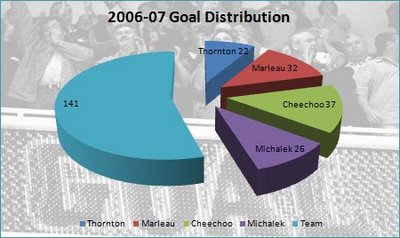 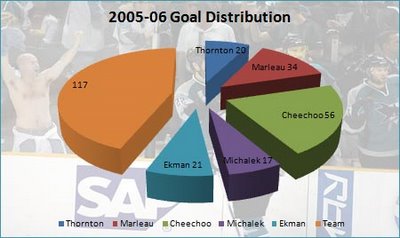 I guess it was a result of reading USA Today too often, but I always wanted pie chart functionality on my blog. I will break down a few of the recent scoring trends for San Jose on Sharkspage soon. I was going to try to project the largest number of 20 goal scorers for the Sharks in a few years, but as has happened often when I delve into the numbers it usually disproves the point I am actually trying to make.

There is no live broadcast of Dan Boyle's return to Tampa Bay tonight on Comcast Sportsnet Bay Area. There will be a broadcast of the game on the NHL Network (as reported on the Sharks-Florida broadcast last night, my cable guide shows Northern Michigan at Michigan State tonight at 4PM), and Sharks radio play-by-play host Dan Rusanowski breaks down a plethora of radio options for tonights game here.

If you want to go off the board for your hockey viewing today try Yahoo Streaming (Pittsburgh vs New York Rangers), hockeywebcasts.com (Ottawa @ Toronto, Anaheim @ Montreal, Pittsburgh @ NY Rangers, Edmonton @ Vancouver), or channelsurfing.net. You could also subscribe to the NHL's official Game Center (I keep confusing this with ESPN's old GameCast), which has very good video quality and a number of bells and whistles to make it worthwhile. Boycott tsn.ca until they unblock American viewers.