Random Pacific Questions: Which Team Do You Hate Most?

Share All sharing options for: Random Pacific Questions: Which Team Do You Hate Most?

It's kind of weird being a Kings' fan these days because we don't really have a rival right now. I guess the Kings' biggest rival is either AEG or one another. Still, that doesn't mean I don't hate other teams in the Pacific: there's the Ducks and Corey Perry, the Stars and their triple axis of tools (Morrow, Ott, Avery), and the Coyotes and Olli Jokinen's baby head. But I was watching the Sharks-Ducks game last night and I came away thinking 2 things: one, the Sharks looked pretty good, and two, I hate them more than I hate the Ducks. As someone who has hated the Ducks most since they came into the league, this shocked me. 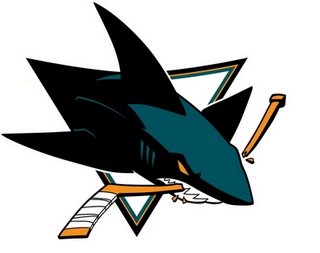 
I've always either ignored or privately admired the Sharks for their plucky can-do attitude, but this new incarnation sickens me. There are the obvious reasons: Rob Blake and Jeremy Roenick are dicks, Jonathan Cheechoo is a huge douche bag*, Milan Michalek is a little bitch, etc. but I think it goes deeper than that for me. I think the biggest difference can be seen in the trades for Joe Thornton and Brian Campbell. When Thornton arrived in San Jose the fans showered him with praise and gave him a safe haven from the constant haranguing he was getting from idiotic Boston fans. It was nice and everyone felt great for Joe, myself included. This last season when Brian Campbell arrived, the cheers were different; sure, they were loud and gregarious, but they seemed kind of pathetic, a desperate plea for Campbell to stay with the Sharks and lead them to a Cup. It was a weird change in attitude for the once lighthearted San Jose crowd and it made me uncomfortable. San Jose fans have gone from some of the best supportive fans in the league to... Boston fans. Fans that once cheered Joe Thornton's Hart Trophy now whined when Evgeni Nabokov rightfully lost the Vezina to Martin Brodeur. Fans that once gave Joe Thornton peace from a crazy fanbase are now doing the same thing to Patrick Marleau. It's weird.

*Cheechoo reminds me of the little guy playing pick-up basketball that talks trash while his partner (the 2-year starter at Vandy before his knee blew out 5 years ago) spends the entire game covering for the little guy's mistakes. 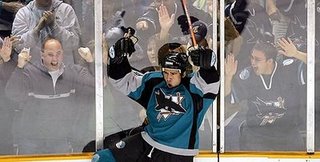 Raise your hand if you're a douche bag.


I think the past few post-season blunders ('05-06 standing front and center) have turned both the Sharks front office and their fans kind of insane. They so desperately want a Cup that they're sacrificing what made them fun in the first place to get it. They're not creating a system and then letting it create a Cup for them, they're throwing whatever they can at the wall in a desperate attempt to salvage Joe Thornton and Evgeni Nabokov's best years. It reminds me of the Lakers in '03 when they signed Gary Payton and Karl Malone. I'm a Lakers fan and even I hated that team. I'm not saying that's wrong or even stupid, but it makes them much less likable to an outsider's eyes. So good luck this season, San Jose, and I hope you find that championship that has eluded you; just know that you had to become less likable than the Anaheim Ducks to do it.