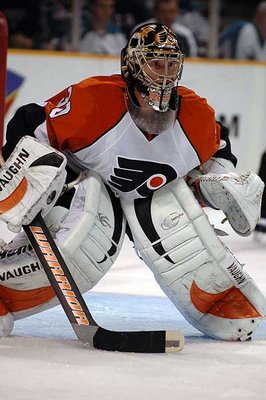 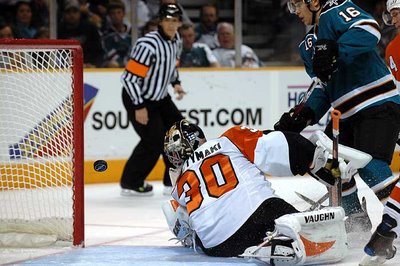 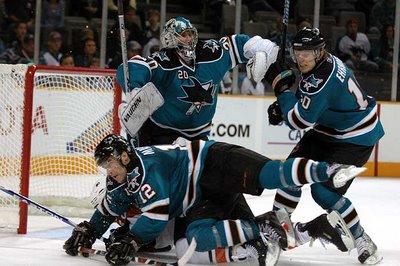 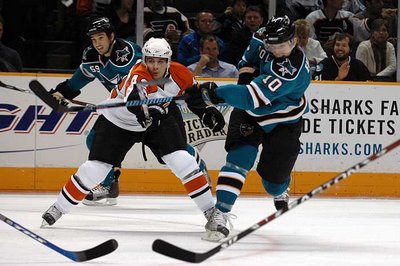 The Sharks 5-4 overtime win on Saturday night was an entertaining affair, with new defenseman Dan Boyle contributing to the game tying and game winning goals respectively. It was Boyle who fired 2 of the Sharks 5 shots in an earlier 5-on-3 man advantage, Boyle who split 2 Flyers and pulled up in front of a third to create the game tying goal sequence, and it was Boyle who drove the net in overtime and hammered home a hard feed from Thornton to give the Sharks a win and a 5-1 start on the season.

The Flyers are a bit of a conundrum at this point. They have some injuries on defense, and they brought in a hulking Andrew Alberts from Boston who took a number of shifts, but they had more than enough opportunities to lock down a difficult road win. Instead they opted to go eye-for-eye, check-for-check with San Jose and they got burned. The physical element to the game kicked off early in the first period when defenseman Rob Blake checked Scott Hartnell hard into the post. It was a clean play to prevent a rebound opportunity, but Downie/Staubitz and two other Flyers jumped into a scrum behind the net. Devin Setoguchi scored the game tying goal, but he also destroyed Scottie Upshall with a check in the defensive zone, and crumpled Hartnell with a check near the penalty box late in the third. Hartnell took offense, and came after Setoguchi with a stick high to the head that connected about 3 feet from where I was sitting.

What was noticeable was the speed at which he came in on the play, and the fact that the puck had already been played around the boards. Too many bodies between the ref and the hit, or they were focusing on another part of the ice are the only reasons I can think of for that non-call. There was also a NHL statistican error, as one of the players was left in the box longer that 2 minutes (+20 seconds). I was on the other side of the ice, so I do not have the details, but there was a stoppage in play so it was not a major problem. Another example of the speed of the play is the shot of Patrick Marleau checking Mike Knuble in the third photo above. A split second before that picture neither player were in the field of view, a split second after that photo both players were crumpled against the end boards. That hit happened at full speed, as Marleau prevented Knuble from driving the net to create a scoring opportunity.

In the second photo the puck looks like it is traveling into the net, or wide to the right. It actually trickled a few inches wide to the left on the play. Niitmayki was solid on the night, stopping 40 of 45 shots, but his one mistake on a harmless Joe Pavelski shot from the blueline (with the Flyers best 2 defenseman on him) resulted in an 8 foot rebound in front. Pavelski jumped on the loose puck and hammered home a goal early in the third period to spark the Sharks comeback. Niitmayki was solid before that play with spectacular stops on Thornton and Boyle, and after that play with a little over 2 minutes left when he robbed Cheechoo with a highlight reel glove save. The Sharks were 1-7 on the power play, and adjustments are needed. Several times I noted that San Jose only had one player in front of the net, and the radio broadcast noted they were setting up too far off the goaltender. Joe Thornton initiating play behind the net may become too much of a routine as coming off the half boards last year. New head coach Todd McLellan mentioned several times he wanted Thornton to drive the net with the puck, and that he also wants more players on other lines to crash the net (like Jonathan Cheechoo).