When blogs battle, everyone wins

Share All sharing options for: When blogs battle, everyone wins

I really should have been promoting this semi-event more (I've had it in the sidebar for a few weeks, I think), but I guess BoC was one of the last entries in the field. Anyhoo, the NHL Arena messageboards are running an online Battle of the Blogosphere, where 128 blogs are stacked head-to-head in an NCAA-style vote-off for a champion. You can read about it here.

Before I link to the list of match-ups, though, I do want to mention a few things, and first is a quick profile of why you should vote for BoC's first round adversary, Behind the Jersey. If you're unfamiliar with the site, Christy Hammond is a Red Wings blogger, and if information is your game, she's all over it. 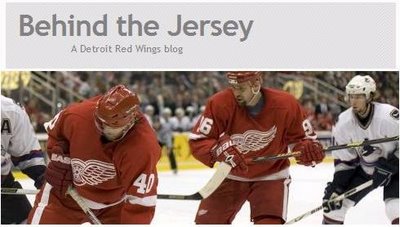 Take a scan of her posts, and check out her profile page, and you'll see that she loves her Wings pretty dearly. And while I'm a guy who holds plenty of hate for Wings fans, that's never an issue with Christy.

You may notice that I've had BTJ in an exclusive group on the sidebar called "BoC Inspirations", which I guess I should explain a bit. It's not meant to be a "best of" list or anything (there's plenty of blogs not listed there that you should definitely be tracking -- Puck Daddy, The PensBlog, FHF1, FHF2), but it definitely includes some of the best. Really what the "Inspirations" listing represents is the sites that turned Sleek into a blogger today (plus I added Fanhouse when they paid me to draw cartoons). The primary reason why BTJ made that list was because of the series that Christy ran, Behind the Blog. It's one series that I'd recommend any aspiring blogger to read (especially the questions about "Why do you blog?" and "What advice would you give?"), because I think it offers plenty of great perspectives -- I know I was influenced especially by the BoA take and Mirtle's offering, plus here's one by our pal Mike Chen (and one on PJ here).

Anyways, I've been stalling long enough -- here's the Battle of the Blogosphere. Be warned, it is a long listing, and I don't recommend voting for each and every contest. My advice? Scan the list, pick out your favorites, cast a vote (registration is free), and when you're satisfied, stop. Here's where you can win, though -- if you catch yourself on the trailing side in any poll, it's probably worth giving the other entrant a read. Of course, I don't assume that this Battle of the Blogosphere will categorically determine anything (popularity contests rarely do), but that's not to say it's a waste of time; it does at least offer a wide glimpse of the variety of fan sites out there. What's stunning to me, actually, is how many quality blogs aren't even in the running -- this blogosphere experiment grows and improves by the week, it seems.

If you'd rather skip all that and just push BoC to round two so I can campaign for another quality opponent, though (or eliminate BoC so I don't write about this again), here's the direct link for BTJ vs BoC.