Will the Kings Trade for Marian Gaborik?

Share All sharing options for: Will the Kings Trade for Marian Gaborik?

No, probably not. But still, it's fun to think about. Gaborik, of course, is the talented but oft-injured winger for the Minnesota Wild who apparently hates Minnesota so much that he'd rather die than play there. (Can't say I blame him.) The hot rumor is that Minnesota GM Doug Riesebrough is actively shopping Gaborik and he has called both Los Angeles and Montreal. This isn't really a surprise because the Kings have a lot of great prospects, but there's just no way Lombardi is going to give up anyone of importance for a guy that'll be a free agent. The Kings aren't going to trade for Gaborik when they know they can just sit on their hands in this Lost Season and potentially sign him this off-season, especially when trading for him means giving up something like Alexander Frolov and Thomas Hickey.* Another problem with Gaborik is that you never really know what you're getting: are you getting one of the best players in the game, or are you getting a guy that'll only play 40 games a year? Are you getting both? Luckily for the Kings, they already know what they're getting because they've had him before; only last time, he went by the name Ziggy Palffy.

*Can you imagine Frolov in Lemaire's system though? Mmmm... tasty. 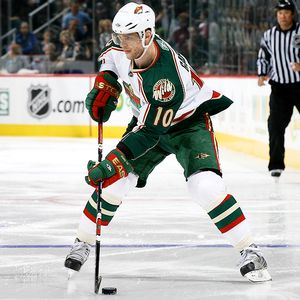 The Kings traded for Ziggy Palffy after the 1999 season for Olli Jokinen (1st round pick), Josh Green (2nd round pick), Mathieu Biron (1st round pick), and a 1st round pick (1st round pick). Like Gaborik, Palffy had a unique blend of speed shooting ability and, like Gaborik, Palffy had a sensitive groin. Palffy spent 5 seasons with the Kings, averaging over a point a game and about 60 games a season. The Kings made the playoffs 3 times in that span, advancing past the 1st round once. The trade for Palffy was ultimately worth it because two of the three prospects they traded were worthless, but the key difference between then and now is the salary cap. Trading for Gaborik and then signing him to a ludicrous deal (which someone will give him VANCOUVER) would fuck everything Dean Lombardi has been building the past 2 1/2 years. The Kings would be cutting a big swath out of their cap space and depleting the cheap talent pool they have to compensate for Gaborik's deal. Dave Taylor made this move; Dean Lombardi won't. 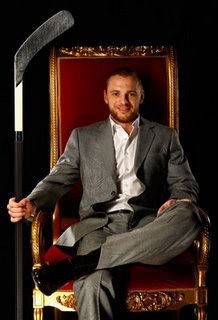 That's not to say that the Kings won't go after Gaborik (or Jay Bouwmeester) this off-season, however. The Kings should have a clear number of their cap picture after they sign Jack Johnson to a 2-year deal or whatever and if they have a chance to upgrade either Alex Frolov or Johnson then they should definitely do it. They can then trade one of those guys for depth. Gaborik is an outstanding player when he's healthy and Lombardi isn't one to let a little injury history deter him from signing a player. This off-season should be pretty interesting for both the Kings and the Ducks.