Two games ago, the Kings were sitting at 3-4-1 and had just put in a workmanlike effort against the Detroit Red Wings. The Kings had been competitive in every game but the first one and were especially effective in rotating three scoring lines. Then coach Terry Murray decided to reunite the O'Sullivan-Kopitar-Brown line from last season. Okay, fine, our third line sucks now but that line was good last year so maybe it'll work. 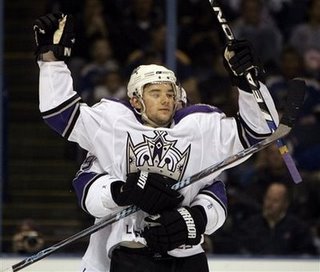 
Terry Murray then decided that maybe the problem was the Frolov-Handzus connection and moved Alex Frolov to Jarret Stoll's line. Oh, and he also gave up on the O'Sullivan-Kopitar-Brown line after one game and moved O'Sullivan to Frolov's spot with Michal Handzus. 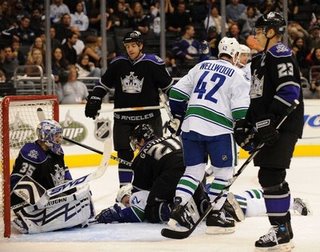 Today the Kings are expected to keep the Frolov-Stoll-Moller line together and probably move Kyle Calder back with Anze Kopitar and Dustin Brown. I imagine they're going to use Patrick O'Sullivan with Michal Handzus and Wayne Simmonds because, well, the alternative is so unappealing I can't even bring myself to type it. The basic framework the Kings have followed so far this season is to put Brown-Kopitar together and then Alex Frolov and Patrick O'Sullivan on the next two lines to give scoring on every line. Like I keep saying, the Kings need to bring up Ted Purcell alongside Kopitar and Brown or on the third line to give the Kings more scoring punch. But then I guess it doesn't really matter; it's not like the Kings are going to be any good anyway. This is all just rearranging deck chairs on the Titanic. Not even deck chairs, it's like moving those dining tables the Irish ate off of and Rose danced on.


Much has been made of Anze Kopitar's slow start, but so far his shooting percentage is .04%. I am pretty sure that's bad luck and will come up pretty soon.


I am one of those weird people that love voting. I get up early every time so I can be there right when the booths open and place my vote. This time sucked, though, because the polling place hadn't gotten their "I voted" stickers yet. The hell, man, how am I supposed to get free Starbucks without my Goddamn sticker? I was outraged. Oh well, I voted for Charles Baldwin so it's not like my vote matters anyway.