Share All sharing options for: BoC Gameday—Prelude to Burke Week

Over the next week, I will be writing a series of posts looking back on the legacy of Brian Burke in Anaheim -- moves I liked, moves I didn't like, plus some general observations -- so yeah, look forward to that. For now, though, all I'll say is that I'm fine with the timing of the move, as there's not a lot of GMing that can really be done with the rest this year's roster. The Ducks are so close to the cap ceiling that there's not much to do except (a) promote Bobby Ryan and (b) re-sign some key players before next summer.

We'll get to (a) in a second, but really the re-signing aspect is the key one: once Burke turned down a contract extension, next year's roster became Bob Murray's concern, and better to put that person in charge now than to wait until the offseason. Incidentally, I don't expect to learn very much about Bob Murray's GM tendencies until next summer; for now it's still pretty much Burke's team, and the only clues we'll have about Murray in the coming months will likely be in the form of which UFAs get re-signed and which do not. 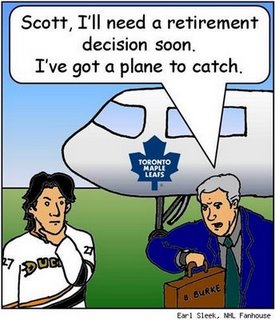 Ah, this PuckToon I drew last June seems appropriate.
(It's not as if I've never stolen from work before.)

I missed Friday's game against the Predators, so I was caught off-guard by the announcement that Frenchie Beauchemin will be out six months with a torn ACL. The ramifications of this seem to be twofold: (a) Bobby Ryan and Ryan Festerling got promoted from the AHL under long-term-injury cap relief, and (b) Scott Niedermayer will be getting a new minute-eating defense partner. I hesitate to say who will be getting the promotion, but I think I'd give Steve Montador a shot at some top-four duty -- he's a guy who's been impressing me with his overall game and could play anchor to Niedermayer's roamer game.

As for Bobby Ryan, now's the opportunity for the kid to step up to the big leagues -- on paper, he potentially gives the Ducks a set of six legitimate top-six forwards (sorry Marchant, one of the requirements is "hands") for the first time this season. Between Kunitz-Getzlaf-Perry and Ryan-Morrison-Selanne, I'll be interested to see how the Ducks' offense operates. It may just provide the positivity to offset the downside of losing Beauchemin.

Prediction: Tonight Sleek's lucky green shirt is going up to the Honda Center rafters (translation: I'll be sitting in the nosebleeds), as some hockey-playing friends of mine have taken advantage of a Ducks promotion -- sell enough upper deck seats and they get to play a short beer league-style game on Honda Center ice after the Ducks and Kings end. So if you see a green shirt during the game in Section 430, Row J, feel free to say hi, or if you're bored after the game and want to see some amateurs play, I'll be in the lower bowl for that. Ducks 4, Kings 2. Goals by Ryan (x2), Pahlsson, and Getzlaf.