Share All sharing options for: Brian Burke Week Part III: Nothing but shout-outs

Time to take a break from my normally scheduled Burke Week -- tomorrow I'll get to the positive GM lessons we can learn from the Burke. Today instead I'm just going to toss a few links and call it a day (partially because I feel bad just tossing these at the end of a long post; mostly because I'm lazy).

First off, in keeping with Burke-themed tradition, I was a guest again on The Rink Podcast this week to talk about what the Burke departure means for Anaheim. I'm the first of three guests in a virtual All-Star Game of blog guests -- Steve Lepore of Puck the Media also talks about Versus ratings, and Alanah McGinley of Canucks and Beyond talks about Roberto Luongo's shutout streak. Not my strongest work, but then again, podcasting ain't my forte.

Secondly, I wanted to give an update on the guy sometimes known as Kyle J and sometimes known as "the Swede" -- our mysterious comic book contributor here at BoC (Episode 1: Toronto, Episode II: Detroit). Well since his BoC debut, Comic Book Guy has taken the new name "Good Kyle", and has started his own multi-faceted blog: Good Kyle Versus Evil Kyle. I've added the link under "Hockey + Cartoons = Awesome", even though hockey cartoons seems to be a small portion of what that blog is offering. Good Kyle assures me that there's more hockey-themed artwork coming, though, and sent this image as a token of good positivity: 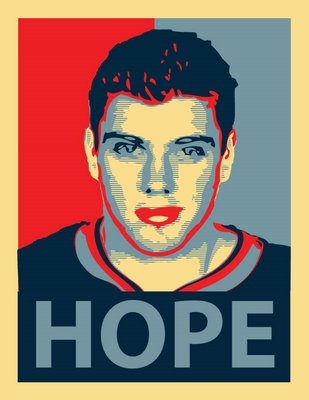 And lastly and leastly, I also stayed Burke-themed on today's PuckToon. It was a rush-job, no doubt, but I'm not dissatisfied with the result. Enjoy!