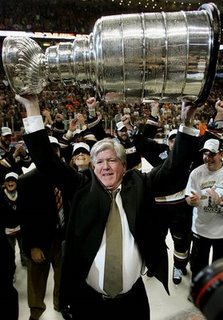 I certainly didn't see this coming this fast, and I don't have much time for reaction today, but here's the link.

I'll have a proper good-bye for the guy at some point, but for now, welcome to the new Ducks' GM, Bob Murray. Sleek = Stunned.

[Update, 11:40 am. Per the Star's Damien Cox (link via KK), Burke reportedly will stay on as a consultant with the Ducks until the end of this season. More to come after the press conference.]

[Update, 1:10 pm. James Mirtle has some quotes from the press conference, but generally it wasn't very enlightening at all. I expect Burke's next press conference, whenever it comes, to reveal a lot more of what his future holds.]

[Update, 2:40 pm. Nobody can keep up with Puck Daddy. A nice piece looking at the Anaheim tenure of Burke, plus some looking ahead to what he might face in Toronto.

[Update, 2:50 pm. Probably my last update today, but the OC Register has many more Burke quotes, and expects Burke to remain with the team for one or two more weeks before being given permission to talk to other clubs about future employment.]