Drew Doughty is My Hero

Share All sharing options for: Drew Doughty is My Hero

I've hesitated to write this piece so far this season because I keep waiting for the roof to cave in, but Drew Doughty is the greatest 18 year-old defenseman I've ever seen. I mean, I haven't watched Luke Schenn or Luca Sbisa so far this season because I don't care about them but I just can't imagine how they can be better than Drew Doughty. Doughty leads all rookies in ice time (despite only playing 15 minutes one game because of an injury) and he's playing most of those minutes alongside Anze Kopitar and Dustin Brown, who other teams match their best line against. According to Behind the Net, he leads all defensemen on the team in quality of competition. There's only been one time when he looked like a rookie, when Ryan Smyth turned him inside out, but otherwise he's been outstanding. He's not getting a whole lot of time on the penalty kill, but that's more because he needs some time to rest rather than he can't handle it. 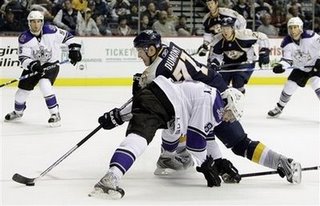 What impresses me the most about Doughty is how he can just control the game. It doesn't matter who's coming after him, Doughty is always in control and doesn't ever rush the play. When you contrast him with someone like Denis Gauthier (who looks like Sonic the Hedgehog when you hold the button so he stays still) or Peter Harrold the difference is stark. When Doughty does go full-speed it is a surprise because he usually looks so smooth you forget what he can actually do. 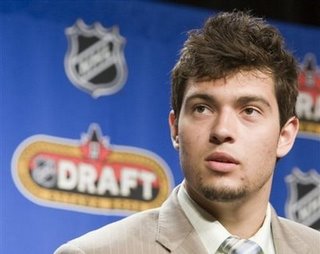 
Doughty is starting to open his game up a little bit. Last night against Florida, there were a few Niedermayer Moments where someone passed the puck behind the net to Doughty and I thought, "What the hell is he doing back there?" But, like Niedermayer, Doughty is fast and smart enough to get back in position before the opposing team has a chance to exploit it. And he has Sean O'Donnell, who can't really do a whole lot but just does not make mistakes. It's insane. It's still early and everything, but I think I love Drew Doughty. He's already my 2nd favorite player behind Bailey.* I haven't really looked at the whole rookie scene yet, but if Doughty can pick up his offensive production (and I think he will once Kopitar gets going) then he has a very good chance at winning the Calder.

*Did you guys see for the game on Election Day when Bailey wore an Uncle Sam outfit? He's hilarious and topical.