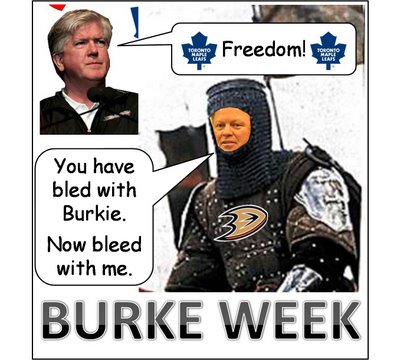 Welcome to the second installment of Brian Burke Week, as I ponder back on the Anaheim yester-legacy of the mouthy one. Yesterday I made a case for three moves that I think Burke gets too much flak for; today it's time for Part II: Criticizing three Burke moves that I don't think get enough flak.

A few things (1) I'm not going to include the Todd Bertuzzi signing; that one's so obviously bad that I don't know if it's worth discussing. Just know that my list has these three things plus signing Todd Bertuzzi. I'm still not passing judgment on Brendan Morrison, either (he gets a free pass for a while because two knowledgeable Canucks fans I talked to were shocked that B-Mo was even playing already). (2) I am not saying that any of these moves are guaranteed to fail -- there's still judgment to be made on all of them. It's just that we should keep all these things in mind when remembering Brian Burke. (3) I am not talking about his draft record until later this week. 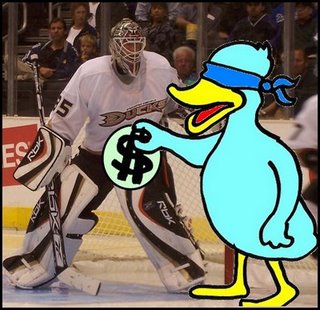 Sleek's initial reaction: Thanks, Giguere. We may never know what he passed up by signing this contract today and not waiting for a desperate team on July 1st, but I gotta think he would have landed somewhere upwards of $7 M per year, and he probably could have landed something in the 6-year range. Hooray for ambiguous savings!

Now don't get me wrong; I'm quite a fan of J.S. Giguere, and he's still going to be my #1 goalie whenever I get around to posting Anaheim's All-Time Team (a shout-out to my fellow slackers!). But still, not a week goes by that I don't worry about that no movement contract -- $6 million against the cap for two years beyond this one. Now I fully understand why Giguere earned the raise, coming off a Stanley Cup and all, and I have to guess he turned down bigger money to stay in Anaheim. And I know that there's good reasons for the no-movement clause (Burke looked good there because Giguere's newborn child was under local medical care). But still, we're four years into this salary cap and I'm still unsure what the value of goaltenders really should be -- it's not just a question of value on the ice (demand), but also a function of the players available that can do it (supply). And for a team that's invested so heavily in its blueline, was a $6 M goaltender even that necessary?

For the record, I was very happy with Giguere's play last year; I thought he certainly was a $6M goaltender, or at least close enough, but that's the thing -- almost at best, this contract works out. If Giguere becomes average or worse (coughTurco!cough), that can quickly become a handicap, especially for a netminder's contract. If good goalie contracts have to be given away, then bad goalie contracts have to be swallowed. Also, the contract probably means that Jonas Hiller will be goaltending elsewhere in the coming years. One really has to ask the question, though -- if the Ducks really had cheaper alternatives in Ilya Bryzgalov and Jonas Hiller that could sit behind the "best blueline in history", should Burke have let Giguere sign elsewhere the summer after the cup win? Could he have used an extra couple million on his forwards?

I'm honestly not sure here -- there's certainly a playoff monster in J.S. Giguere that I've never seen anything like, and if that ever shows itself again, Brian Burke will be a god for the contract. I really only bring it up because it's a pretty big risk, especially if a team like Detroit can spend significantly less on its netminding and more on its skill players. I probably would have preferred a shorter contract (the Ducks' two most successful postseasons have come in J.S. Giguere's last two contract years, I think). We shall see how we feel about it later; it's all up to Giguere now. 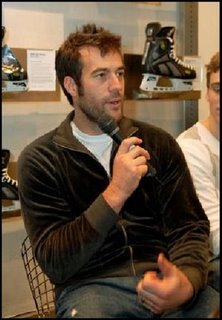 Sleek's initial take: I didn't say anything useful on this one. But doesn't it look like Todd Bertuzzi is telling some fans to "suck on this"?

Yeah, I know I wasn't going to bring up the Bertuzzi signing, but this is a different matter entirely -- once that contract was signed and a year in, should Burke have bought it out? For those not tuned in to cap math, basically what it amounts to is instead of paying Bertuzzi $4M this year, the Ducks will pay him $1.33M this year and next to not play for them, plus of course paying some player to fill in on a top-six role (Brendan Morrison, give or take).

Now again, I don't want to be misunderstood here -- I am thrilled that the Ducks are playing without Bertuzzi. It's so nice to know that everyone backchecks again, or at least pretends to. And while Morrison has been an offensive letdown early, I'd still take him over Bert anytime. But still, I'm not sure I like that Burke went the buyout route -- it's always struck me that buyouts are what rich teams do, and SoCal's Anaheim is not one of those teams. Burke has effectively spent some of next year's money on a player not in a Duck uniform, and that sort of future-spending should be off-limits for a departing GM.

I really expected the Ducks to suck it up and carry Bertuzzi through his contract year, and I'm not sure it would have been that terrible. Part of what hurt the Ducks last spring, in my opinion, was that they had to carry around both Bertuzzi and Weight among their top six, and couldn't even play them together effectively -- neither guy wanted to shoot the puck or skate, and they were essentially passengers. With Weight departed and Bertuzzi finding a potential center in Ryan Carter (who made Bertuzzi stomachable by backchecking for two), I thought that the Ducks could carry one passenger on a scoring line and just not worry about the sunk cost. I reasoned that a one-year $4M gamble was more stomachable than the original two year gamble -- plus it's a contract year, why not?

Again, we shall see. It may turn out that I'm way wrong on this, and the $1.33M pre-spent next year doesn't impact next year's team much at all. Or perhaps Brendan Morrison could awaken and the Ducks could roll four dangerous lines, and I'll gladly rescind. But still, I probably would have just sucked it up and hid Bertuzzi in the lineup, or found another way to be rid of him (his contract, theoretically, gets more tradeable by the day). Buyouts probably shouldn't have been an option.

This all is related to the notion that not that long ago, the Ducks were an incredibly cheap team. Remember the days when the top line of Kunitz-McDonald-Selanne was playing for about $2.5 million total and the Ducks were millions away from the cap ceiling? Of courses, raises had to happen, especially with the cup win, and I certainly do support most of Burke's maneuvering around Niedemayer and Selanne's semi-retirements. Still, as a result of all that reactionary GMing was that the Ducks quickly became a cap-ceiling team.

The sweet irony, of course, is that they have no business whatsoever being a cap-ceiling team. Playing in Southern California is a double-edged sword, revenue-wise (note: best I understand). For one, there's a pretty tepid fanbase -- ticket prices must remain low enough to keep fans coming. But also, because there are so many people in Southern California, neither the Ducks or Kings can ever collect on revenue sharing, even if needed. That's not a huge deal, but it does mean that on paper, the Ducks should be more near the salary midpoint than the ceiling. Burke got to spend up to the ceiling, but the real question is: What will Bob Murray be allowed to spend?

That's why the $1.33 M to Bertuzzi next year might not matter -- it prevents Anaheim from approaching the ceiling but that's probably going to happen anyway. Should Selanne for some reason retire, his unpaid salary would count against the cap, too, but that might be unspent cushion also. Overall, I'm not too worried -- I do mostly like the contracts that Burke has set up for next year -- Murray may fill in some spots cheap, but I think there's plenty of talent to work around. But it should be understood, Ducks fans and Burke fans -- there will be some natural letdown once payroll returns to a more rational level. To tell you the truth, I'm looking forward to those middling-spending ways -- it's only been one year, but serious cap math makes my head hurt; I'm much more comfortable "sort of" knowing what players' salaries are (you know, without having to know how many days they spend in Bakersfield).

So that's Part II -- sorry it got so long-winded. Feel free to agree, disagree, add your Burke criticisms, or insert your own randomness in the comments. Part III is more positive, possibly tomorrow: What we can all learn from Burke the GM.

Prediction: As for this game tonight, oh yeah, some guy named Ovechkin's coming to town. I do feel obligated to report that I was in Anaheim to see Ovechkin's first career hat trick, so just to avoid any suspicion I'm staying home tonight. Anyways, visit your Japers Rink for all things Cap-related (Capitals, not salary cap). Ducks 4, Caps 3, Anaheim channels the spirit of Joffrey Lupul and puts four pucks past Jose Theodore. Goals by Selanne, Marchant, Pahlsson, and Festerling.