Well, another moderately-deserved two points snatched in L.A. last night, but I'll tell you -- the 2nd and 4th lines looked pretty outmatched through most of the night. Brendan Morrison is still struggling to produce, though I still don't mind his overall positional play, but I also think that Teemu's not fighting through enough checks, and Todd Marchant hasn't carried a scoring line since ever.

But hey, today's a new day and a new opponent -- the St. Louis Blues. Fun Fact: Did you know that St. Louis is in the Central Division, home of the Detroit Red Wings? Yeah, of course you knew that, but I'm horrible at segues.

But now that we're talking about Detroit, our friend, now mysteriously known as "The Swede" (though tireless research has revealed he doesn't live in Sweden), has produced another comic book masterpiece, this time focused on last week's encounter with the Red Wings. Now presented in thrilling two-part format! 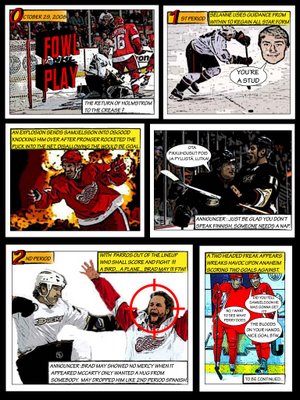 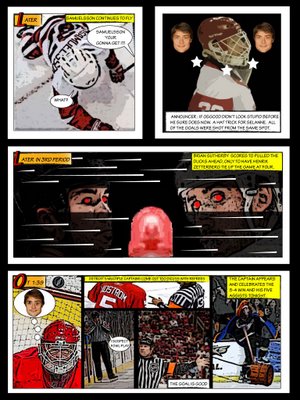 Overall: brilliant, but I especially like the look of the middle panel on the second page. Fantastic storyline progression, and it just looks damn cool. And I miss Brad May already.

More internet slutting guest appearances: I'm still not very comfortable in front of an imaginary microphone, but I was a guest on another podcast yesterday afternoon before the Kings game -- The Rink Podcast Episode Six with Tom Luongo and James "Tapeleg" Grailian. We talked a bit about the Ducks and Sundin rumors (I'm not in until the final third), plus there will be a full-length bonus interview sometime later this week. Let's hear it for thrilling two-part formats!

And lastly, I will put a proper post together sometime later for the Duck nominees, but I wouldn't fret too much about who is or isn't on the NHL All-Star Ballot. If you recall last year, I believe seven of the twelve popularly-elected starters actually showed up to the event, so it's not very meaningful anyways. Plus the vote is probably in boring one-part format, how lame.

Prediction: Maybe all Brendan Morrison needs is an encounter with Teemu's two favorite linemates, Andy McDonald and Paul Kariya, just to see how the Finn prefers to receive his passes. Ducks win, 3-2, in a thrilling two-part game (I dunno, let's say a pane of glass shatters midway through). Goals by Getzlaf, Pahlsson, and Montador.