Share All sharing options for: Ducks Gameday—Sleek starts a campaign

I don't have anything to say about tonight's matchup against the Cats, but I do want to recommend The Litter Box, a Panthers-themed hockey blog that I enjoy thoroughly. Whale4Ever mixes his hockey updates with plenty of awesome images and plenty of snark, and I'm much more pro-Cat thanks to his efforts. Rock on, dude.

Instead, I wanted to ride the coattails of the campaign fever that's been taking over BoC, between Mike Chen's push for Seto/Gooch to the All-Star Game and Rudy Kelly's Doughty for the Calder Trophy movement that's just picking up steam. Well, just because I'm apolitical and anti-voting doesn't mean that I don't care about important issues, and there's certainly one movement I'd like to throw my negligible weight behind. As a bonus, it's not even anything I have to convince you readers to do—the primary audience for this message is for just one person only: Brian Burke. 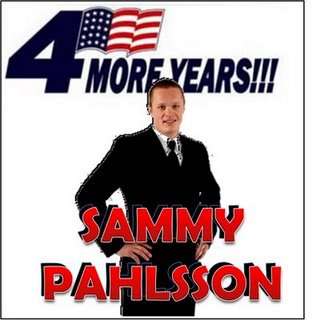 C'mon, Burkie, you know that Sammy would re-sign you.

As you know, Brian Burke is probably headed elsewhere next year, and I've already stated that he's got my blessing—at least he's left the team in a flexible enough salary position next year that a replacement GM won't be cap-cramped to start the new job. Here's who the Ducks currently have under salary for next year, with everyone else a free agent:

Combined, it comes to some $32.5 M, which is a bit pricy, but at least some expensive positions are pre-filled (goaltending, scoring forwards, top d-man). Well, over the next few weeks I plan on coming up with Burke's Bucket List: a list of items I'd like to see Burke do before hitting "greener pastures" next summer. 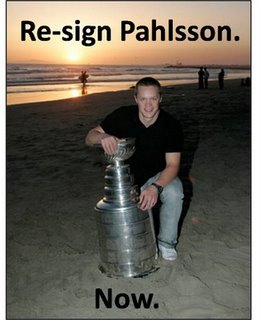 First and foremost is re-signing Sammy Pahlsson, who of course I could write volumes about (as we'll see once this campaign really gets rolling), but for now, let's just focus on the penalty killing. Since Burke took over the team, the Ducks have taken strange pride in their ability to take penalties, and Pahlsson has quietly shouldered the brunt of that. Since the lockout (regular season only), Sammy has played nearly 1,103 shorthanded minutes, which is the seventh highest total in the league behind Bouwmeester, Phillips, Lidstrom, Havelid, Chara, and Keith -- all defensemen. His total is 222 more minutes than the next highest forward, Ottawa's Chris Kelly (note: this was a hasty study just looking at just the top 90 minute-getters for each season, but I think it's correct).

So Burke, you owe it to Ducks fans, Ducks players, and especially to Sammy himself -- four more years, dude. I'm not even going to make a recommendation on dollars; whatever it takes is fine by me -- even if it's an overpayment, we still probably owe Sammy for the harsh service he's endured for the past four years.

So anyway, that's the start of my campaign; more to come in future posts. Feel free to lend your support in the comments.

More Tragedy in the Oilogosphere: You'll of course recall last month's incident between DMFB and the Oilers pressbox that led to Dave's departure from hockey blogging. Well, now the damage is doubled. Mike W, another CiO contributor and inspiration for my hockey blogging has likewise decided to give up his posting, and again, I am crushed by the news.

Mikey, please keep visiting, and trust me, I'll post anything you draw. And don't give up the Chamber of Comics -- it's sheer awesomeness, at least the parts that Internet Explorer will let me see.

I would be remiss if I didn't link to this -- pretty much the best thing any hockey blogger has ever done, ever.

And lastly, part two of my interview with Tom L. and Tapeleg from The Rink Podcast has now been posted, and this time it's Sleek from start to finish. Lots covered there, from some philosophy of what this blog is all about to remeniscing on the 2003 Cup run, and some follow-up thoughts about Paul Kariya. Enjoy!