I can't really tell you what's going wrong with the Dallas Stars this season, as I have yet to even watch a single game. Still, the spreadsheets will tell you, you don't have to look much past the 50 goals allowed in just 12 games. To put that in perspective, the Philadelphia Flyers currently lead the league in goal-scoring at 3.67 goals-per-game (excludes shootouts). The Stars are giving up goals at a rate of 4.17 goals-per-game, half a goal higher than any team can manage offensively.

There's probably plenty of culprits -- Avery and Brunnstrom not adequately replacing Hagman and Miettinen, the absence of Sergei Zubov (who I think returns to the team tonight, along with Mark Parrish), and of course the guy between the pipes. 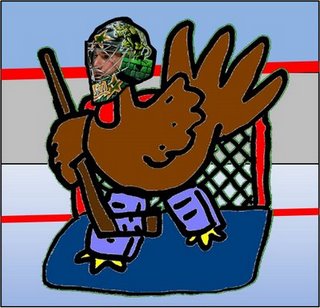 Still, it's still a young season, and it's certainly possible the Stars work a Ducks-style turnaround. It might not even be that bad a time for the Stars to visit Anaheim and San Jose, where they eliminated the BoC last spring. It's going to be important that the Ducks and Sharks avoid thinking too much about revenge in these first meetings, though; the way to really hurt the Stars is to send them home without a win.

The Stars are 3-1 this year when allowing 3 goals or fewer; that's a good winning percentage for that cutoff, though certainly an embarrassingly low number of instances. One other strange sidenote about tonight's game: the Stars for some reason will become the last team this season to play an opponent from their own division. I guess that's one thing a Stars fan can take solace in: there's still time to make plenty of noise in the Pacific.

I'll be at tonight's game, enjoying my own version of the "Rinkside View" from the Row B seats, look for me in my lucky green shirt. I'll be with my dad and his friends, so it will probably be a muted version of Drinky Sleek, but feel free to say hi if you see me.