Ducks keep on climbing, but Helene has her doubts

Share All sharing options for: Ducks keep on climbing, but Helene has her doubts 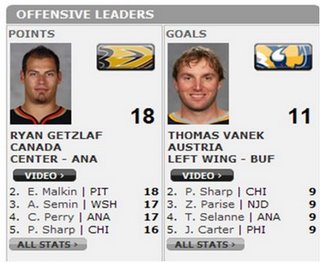 Well here's something I thought I'd never live long enough to see: an Anaheim Duck atop the league leaderboard?! Congratulations to Getzlaf, Perry, and Selanne for continuing their offensive surge, including a combined 4 goals and 2 assists against the injury-depleted Blues last night.

The Sharks should probably beat up the Blues again tonight, especially with Paul Kariya leaving last night's game in the second period with an ever-vague lower-body injury.

The Ducks' 8-0-1 record within their last nine games has pulled the team briefly, at least, within three points of the league-leading Sharks. While the Ducks have played at least two more games than 28 NHL teams, it's still brought them up to the third-highest point total in the league, which is the subject of today's PuckToon.

It's still difficult to tell you how good these Anaheim Ducks are or can be, but one thing is true: they are winning games in a lot of different ways, and are becoming awfully difficult to beat. Whether they can keep pace with the hard-charging Sharks remains to be seen, but at least the Pacific is no longer the one-team race it was two weeks ago.

Brian Kamenetzky of SportsHubLA (link added under L.A. Kings) contacted me yesterday to publicize his latest podcast interview with L.A. Times hockey journalist-legend Helene Elliott. How awesome is it, btw, that Brian's interview schedule moves directly from Rudy Kelly to Helene Elliott -- that's opposite ends of the spectrum of SoCal hockey coverage right there.

Anyways, I gave it a listen last night, and told Brian I'd publicize the interview here. Generally, I don't have very strong feelings about Helene Elliott, but it's nice to hear that she's an actual person. Most of the interview is centered around the Ducks' troubled start and subsequent turnaround (plus more Sundin nonsense), but they touch on the Kings and the Sharks as well. For the most part, she stays pretty realistic about each team's chances, and doesn't sound like a strong believer in any of them.

I can't really fault her for her frank approach; she's a journalist, after all, but Positivity, Helene! As we've seen on this blog in this early 08-09 season, sometimes that can make all the difference.