Share All sharing options for: Earl Takes a Request

Is it being a little too greedy to think the Hawks can go 6-0 on this road trip? Wednesday's game in San Jose won't be easy, but the Sharks can be beat and the Hawks almost did it last week at the United Center. The Hawks led 5-4 going to the third period then took a couple dumb penalties and wound up losing 6-5. It's on to Anaheim Friday and the Ducks aren't anywhere near as good as they were when they won the Stanley Cup. The Hawks close the trip Saturday at Los Angeles against an improved, but nothing special Kings team.

The Blackhawks have lost both California games (against San Jose and Anaheim) this weekend. Let's make it one more so Earl has to bust out the ol' rape graphic again.

Well, apologies for the absence this week, but with siblings in town for Turkey Day, I was away from the computer for a bit -- but I've had myself a great week. I was even in Row B for Friday's game against the Blackhawks, and had great seats to see Wild Wing trip over some carpeting thanks to his duckbill-obstructed view. It was a pretty fun afternoon and a decent 1-0 game, and it's not hard to see why Blackhawks fans are excited this year -- this looks like a top-eight roster and once a goalie gets moved there's even salary room for improvement. Still, I'm not sure they're ready to call for sweeps just yet on the west coast swing; those are rare even for the great teams since the lockout (see comment #2 in this post), and there's always plenty of legit excuses -- miles, time zones, often back-to-backs, home refereeing, and the fact that SJ is killing all visitors this year. Whatever, the dude called the BoC road trip out and crapped out hard, and will get what he deserves. 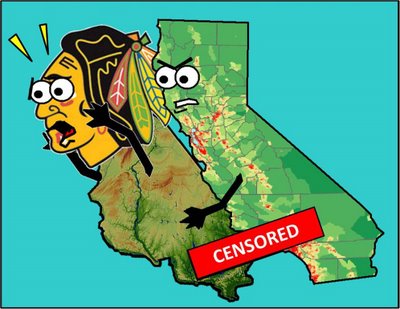 Modified from the State Rape cartoon that started it all.

Go Ducks (and sure, Kings and Sharks too when it makes for a good graphic).