Raitis Ivanans can not skate a regular shift in the NHL. I'm sorry, he just can't. It breaks my heart, because I love the lumbering Latvian, but he plays like dog piss tastes. (No, not delicious, terrible and slightly acidic.) Since the Kings began skating Raitis on their "third" line, that line has not recorded a point. Not a one. Ivanans is like the anti-Thornton, he sucks all the talent out of his linemates. 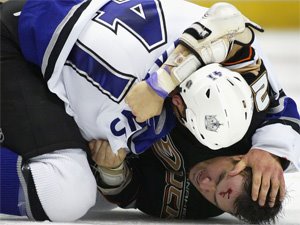 "I just want to see the inside of your skull."


Basically, the Kings are rolling two good 4th lines instead of one good 3rd. There's Ivanans-Handzus-Simmonds and O'Sullivan-Boyle-Harrold, one of whom is okay defensively but can't score while the other can do both but is just kind of... weird. Meanwhile, the Kopitar line and the Frolov line are left fending for themselves on both offense and defense. Terry Murray claims the Kings are rolling 4 lines but they're really just giving more emphasis to the top 2 lines while de-emphasizing the minutes the bottom 2 lines play. That's actually a good thing, but it probably means they need to either move O'Sullivan up and get our best players playing the most minutes or play someone besides Ivanans to give 4 actual lines. If they are going to play Ivanans, then they can't skate Ivanans 9 minutes a game. He needs to be playing 5 or 6, tops. 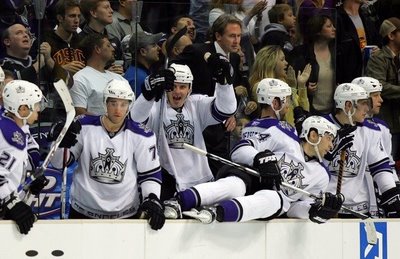 Ivanans-Hey Jon, look what I did. Yea!


I imagine we'll find out later today that Derek Armstrong is going to take Ivanans' spot in the line-up because he played well last game and Ivanans was awful, but who the hell knows. I do know, however, that the biggest guy on the Stars is Phillippe Boucher and Ivanans outweighs him by 40 lbs. No one is going to fight Ivanans tonight and that makes him pretty much worthless. 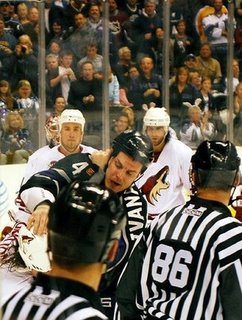 
You know, the only reason I think he's still playing is because everyone is afraid to tell him he can't play. I imagine it'll go like this:

Terry Murray: Hey Hardy, can you go grab Ivanans for me?
Mark Hardy: Sure thing, boss! *scampers away

Raitis Ivanans: Ivanans smash!
TM: Uh, hey Raitis, why don't you have a seat.
RI: ARRRGGGGH!!!!
TM: Umm, okay. Look Raitis, you're doing a wonderful job out there-
RI: Ivanans smash!
TM: Uh, yeah, Ivanans do great job smash. But we think it may be time for you to sit a game.
RI: Ivanans... no smash?
TM: No, not today.
RI: Well, that's your prerogative, Coach. I'm sorry you find my game to be deficient right now and I'll redouble my efforts in practice to regain my spot. No worries, Coach, and I thank you for your time.
TM: Okay, great. Now can you go grab Sully for me? I'm going to have him play defense tonight.
RI: Alright. IVANANS SMASH! *Bursts new hole in wall


Does Mike Modano get enough respect? I get the feeling he's overlooked because he's not quite as skilled as Joe Sakic and he's not quite as dreamy as Steve Yzerman, but he's been pretty good for a really long time. It's kind of impressive that he's evolved from a top line scorer to a solid defensive forward. Plus, he's banging Willa Ford. Well done, sir.

Prediction: I'm going to go out on a limb and guess that the Stars engage in jackassery.