Tonight is Russian Heritage Night at Staples Center, which is a great idea because it gets all of them in one spot so we can capture them. I stopped paying attention to politics in 1989, so I don't know too much, but I do know that commies are bad and I hate them. They tried to trick me with that whole Glasnost thing, but I know what's up: Russians, having failed to take over the world economically, are now trying to take over through hockey. They've infiltrated our nation's capital, led by their furry leader, Alex Ovechkin. His comrades Alex Semin (hehe) and Sergei Fedorov are probably "out" tonight, but I'm pretty sure it's all a ruse for some sort of un-American activity.* Standing in their way? The good, solid, American squad of Los Angeles Kings, led by Drew Doughty, Anze Kopitar and Erik Ersberg. The Kings are the only thing standing in the way of a Russian invasion, and I'll be damned if they're going to fail. "Wolverines!"


*We really should start some sort of committee to investigate all these Un-American activities. I think the House of Representatives should get on this.

As part of Russian Heritage Night, the Kings are offering a ticket that allows you to get two free vodka drinks. Does that seem offensive to anyone else? Are they going to have a African-American heritage night and offer Kool-Aid? I don't get why we as a society let stuff like that slide and yet when I offer my penis to the girls' soccer team I'm the asshole. Geez, you've never seen 10 year-olds create such a commotion.

As promised, here's your chance to vote on a new nickname for the Patrick O'Sullivan-Anze Kopitar-Dustin Brown line. I vow to call this line whatever nickname you pick for the rest of the season or until I get bored. The popular option in the comments was Danzick O'Brownitar, and commenter Reeces came up with this picture (I think he used Kopitar's eyes): 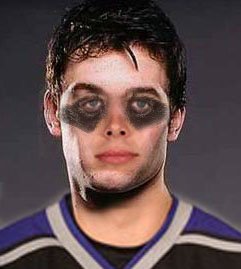 Weird that you can take three ugly guys, combine them, and the result is James Marsden.