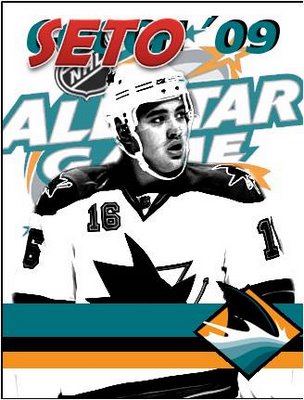 Well, now that that whole Presidential Something-or-Other is over with, we should get to the election that really matters: the 2009 NHL All-Star Game. And yes, while Patrick Marleau, Evgeni Nabokov, and Joe Thornton are on the ballot, there's one fellow who I think is showing All-Star chops early on.

Did you have an Obama 08 or McCain Country First sticker on your car? It's time to throw those out because here's the official start of Vote Setoguchi 09. It's going to have to be a write-in vote, but thanks to the magic of the inter-tubes and text messaging, we can manipulate, erm, boost the results to give us all the Chomp We Need. After all, it's Sharks Territory First.

[image modified courtesy of commenter Will]