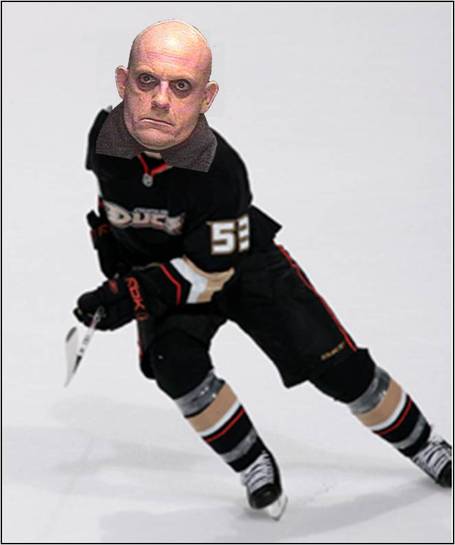 But that's really what makes these out-of-nowhere players kind of great -- they're cheap as hell, they come in with very little expectation, and with proper veteran babysitting can appear to be very effective defenders (thanks largely to Scott's ability to cover their butts).  While certainly Frenchie Beauchemin's contributions on the blueline are missed this year, his injury did allow a new version to step up to the big leagues in a similar role.  From a defensive standpoint, Festerling = Beauchemin, or if you'd prefer, BF = FB.

Uncle Festerling's career is only nine games old so far, and in those 9 games he has played some 124 minutes of 5-on-5 hockey.  Using Vic Ferrari's H2H 5on5 site for the nine games reveals that more than 113 of those minutes (91%) have been played with Scott "the babysitter" Niedermayer.  Amazingly, in those 113 shared minutes, the Ducks have surrendered zero 5-on-5 goals (+3, -0); Festerling's only 'minus' (and his only assist, ironically) happened in the 11 minutes played apart from Scotty.

One other stat that caught my eye about Festerling -- the guy knows his limitations.  In his nine games, he has yet to record a single shot-on-goal.  He's playing it conservative, apparently, saving up that cannon for a special occasion.

Of course, the real hero in this story isn't really Beauchemin and it isn't really Festerling -- while both came into the league with adequate positiioning and bodychecking skills, it's really been Scott Niedermayer's smooth-skating ability to take control of the defensive zone that's enabled them to play over their heads, in a sense.   It's also a hell of a salary cap strategy, especially for this year while the Ducks scrape the cap ceiling -- paying Scott Niedermayer $6.75 million to effectively be a top pairing allows for spending in other areas, and enables defenders like Hedican and Montador to drop down to more realistic roles.

So Ducks fans, I guess the question is for you -- how impressed have you been thus far by Festerling's rather safe and reliable play?  And how much of that would you credit to Festerling himself, and how much credit goes to Scott Niedermayer?  Regardless, it's always a nice surprise to find that somebody you've barely heard of* can step up and capably fill a vacancy -- no matter who's ultimately responsible for the results.

* To be fair, my Xbox 360 predicted that Uncle Festerling was a useful player, but I thought it was joking.