Share All sharing options for: BoC Gameday—It’s about damn time… 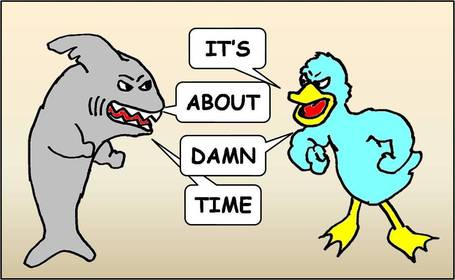 Mike Chen and I agreed to do another combined-forces post for today’s chapter of the BoC (apparently I didn’t learn my lesson from teaming with Chen from the season opener).  This time our theme is the opening phrase, "It’s about damn time…" Essentially we’ll just be taking turns describing some generally overdue occurrences about our teams – Sleek on the Ducks and Chen on the Sharks. Note that Sleek wrote up his answers before yesterday’s Blues game, which of course backfired.

Before we get into that, though, some links to share: first off, I was the first-ever guest on the Dudes on Hockey podcast to help preview tonight's game -- feel free to give that a listen.  Also, I did contribute a PuckToon today at FanHouse that pokes fun at Joe Sakic's latest injury.  Lastly, our Sharks buddies at Fear the Fin will be running a game thread for tonight's game -- you're welcome to stop by.

Enough link-dumping, though -- it's about damn time this post got started!

Sleek: It’s about damn time that Brendan Morrison was a useful even-strength player (Ed. Note: Whoops!). I’ve cut B-Mo a ton of slack this early part of the year, mostly because I’m acutely aware of how much the guy used to kill Anaheim back in his Vancouver days, plus I know the guy is coming off a pretty big injury. Still, B-Mo has played some 342 even-strength minutes (sheltered minutes at that) and produced but 5 even-strength points, last among Ducks forwards. Morrison could also use some help on the power play (+1, -1 in 50 minutes of man-advantage time),but let’s worry about even-strength play first. We also shouldn’t neglect Teemu Selanne, who hasn’t scored an even-strength goal in his last 25 games (!). If these two could get scoring, then the Ducks become a very interesting team, perhaps one that could give the Sharks a run for their money.

Chen: It's about damn time Jonathan Cheechoo scored some goals again. There's no guarantee that Cheech will be in the lineup but he's at least skating with the team again. If he wanted to pick a perfect time for a return, well, now would be it. As we've covered in BoC before, nothing gets Cheech out of a slump faster than playing his Ducks. If he's in the lineup, all of the planets will have aligned to get him a hat trick along with some regular power play time again. Now, don't get me wrong -- I got nothing against Devin Setoguchi and Ryane Clowe (the two guys who essentially supplanted Cheech in the top-six mix). However, I gotta think Setoguchi will slow down at some point and Clowe's an even streakier player than Cheech (healthy Cheech, that is; injured Cheech is about as effective as playing a guy from my beer league). Get Cheech rolling and then see how things shake out when Torrey Mitchell is back and healthy. Maybe you'll even have three scoring lines at that point.

Sleek: It’s about damn time that a visiting team beat the Sharks in regulation time. The Sharks of course are 14-0-2 at home this year, and even dating to March 3rd of last season, San Jose hasn’t lost in regulation in their last 25 regular season home games. They have a 22-0-3 record (16-0-9 through regulation), and have been murdering teams in pretty much all areas. They’ve outscored visitors by an average score of 3.6 – 2.0 (1.1 – 0.6 on the power play), and outshot them by a whopping 37.0 – 23.2. The Ducks have already handed the Sharks their worst loss of the first 1/3 of the season, but can they do it up in mean ol' San Jose without the lucky green shirt in attendance?

Chen: It's about damn time that a visiting team beat the Sharks in regulation time. Yep, I'm going negative here. One of the worst things about being a Sharks fan is that you have such inflated expectations that anxiety comes with every touch of the puck. All of this seems too good to be true, and while we're certainly racking up a lot of pizzas (an update to the MVPP tracker is coming soon), I think we're all a little nervous about when the bottom falls out of everything. However, if a visitor comes in -- especially a heated division rival -- and beats the Sharks, that might actually be a positive in a big-picture perspective. We've seen this team pull rabbits out of their proverbial fins all season long during periods where they've looked out of it, but I want to see how the team bounces back from a defeat in an important game. Not saying that I want them to lose, just that it wouldn't necessarily be the worst thing in the world and it'll happen eventually. (Ok boys, time to prove me wrong and get a point in every game for the rest of the season.)

Sleek: It’s about damn time that these teams had a seven-game series already. Seriously, the BoC storyline since this blog started has been about the parallel dominance of these two teams, plus their stunning inability to meet in the postseason. In 2006 and 2007, the Sharks failed to advance to the conference finals, and in 2008, the Ducks failed to advance to the 2nd round – any one of those wins would have meant California’s first all-inclusive playoff series. Even though there’s an absolute probability that the Sharks would murder the Ducks this coming spring, I’m still enthusiastically behind the idea of seeing a Ducks-Sharks playoff series – I’ll take my chances. The first-ever postseason BoC been so long in its build-up that I can’t help being all for it. Let’s make it happen.

Chen: It's about damn time Patrick Marleau got some respect around this league. Strike the 05-06 Red Wing series and the first half of last season from the record and Patrick Marleau's been consistently a great player in this league since 03-04, both in the regular season and the post-season -- and that's despite butting heads with Ron Wilson, breaking in rookie linemates, and generally being shifted around all over the lineup. Look at his playoff totals and you'll find few people who've put up as good of numbers. This year, he's become a fixture on the PK, one of the best backchecking forwards, and pretty much the best overall Shark for the entire amazing run. I'm glad to see that a few hockey blogs and even mainstream sites have whispers of Marleau as a sleeper Hart Trophy guy; he may never get that far, but let's get him out of the shadow of Joe Thornton and acknowledge he's pretty damn good in his own right already, ok?

As always, feel free to leave your own "It's about damn time" contribution about either team in the comments.

Chen’s prediction: I'm going squarely against points 1 and 2 because I don't know if Cheechoo will be in the lineup and I don't want the team to lose. Sharks 5, Ducks 3. Goals by Roenick, Marleau, Pavelski, Boyle, and Ehrhoff. And an assist for Nabokov. (What the hell, why not?)