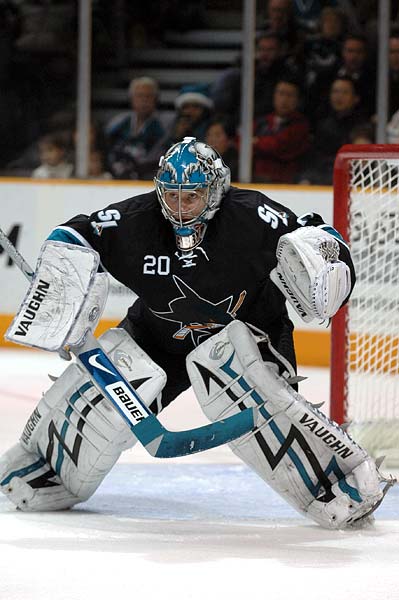 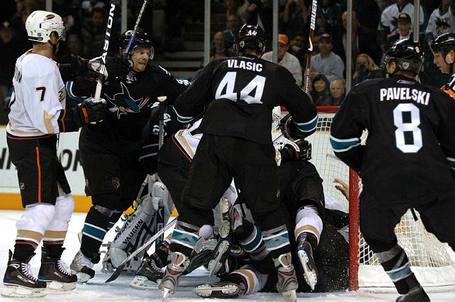 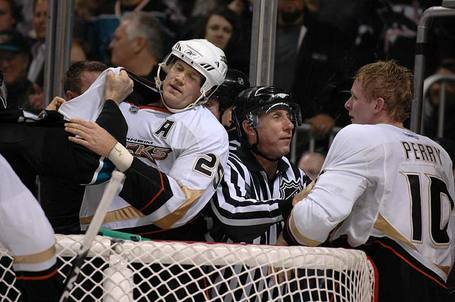 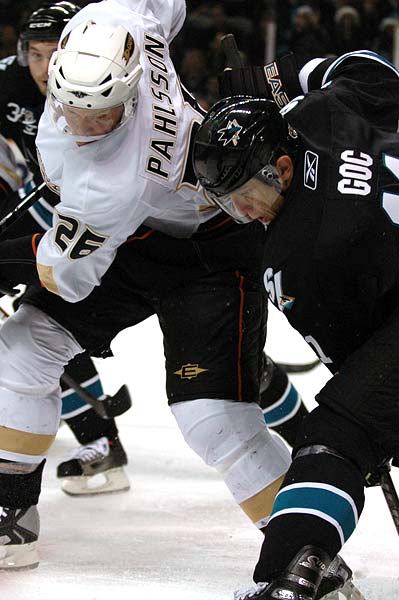 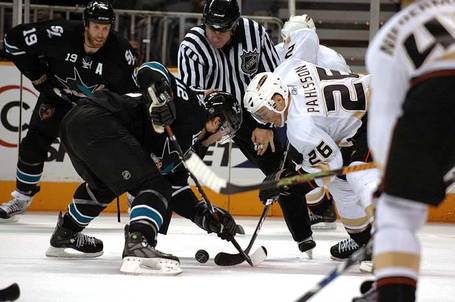 Here are a few photos from the Sharks 2-0 shutout over Anaheim last night at HP Pavilion. The game was tight until the waning moments of the third period. Milan Michalek hammered Chris Pronger with a check into the boards in the offensive zone, and Corey Perry charged after Michalek. Michalek actually dropped Perry with a short punch, but Perry was trying to draw a penalty on the play. Then Kunitz came after Michalek and became a 5-on-5 tussle with 5 minutes left in the third. Perry was squared off with Clowe, but there is no way he is ever going to drop the gloves with Clowe. Never going to happen.

Perry again took umbrage with Rob Blake in the final 21 seconds of play. Blake was working over Perry pretty hard with several cross checks to the back. After Nabokov froze a one-time point shot from Getzlaf, Perry took a whack at Rob Blake from behind and then? You guessed it, he fell to the ice. Several players piled up on top of Blake and Perry in Sharks crease in quick succession. I was on the other side of the ice, so it looked like they might have been on top of Nabokov, but he skated off before things got out of hand. As Niedermayer was getting up out of the pile he took another shot at Michalek and started it up again.

Not to be left out, Perry kept taunting Blake. "What, what are you going to do, what?" was what I heard him saying as he had his hands resting on top of the net, off its moorings and up against the glass. The scuffle started up a third time. Blake came flying in at Perry, but there were two refs between them. Blake had his left hand cocked, and looked close to throwing it over the refs, but several players came in and seperated them. Blake looked mildly annoyed when Sean Avery was trying to make futile runs at Nabokov, he looked genuinely upset at Perry. He was called for a 5 minute spearing major penalty, so there will be more on that coming out shortly. Given Perry's actions, it is hard to think there would be any action from the league. If I am Todd McLellan, Rob Blake has a green light to send a message against Perry in the next meeting at Anaheim. That is the way it has to be with these two teams.