Apologies for getting this post written so late, but I'm a damn lazy guy when I want to be.  At any rate, with all the recent BoC-sweep-inspired requests for State Rape sequels, I thought I'd take a quick look at how often teams went 0-3-0 on a three-team trip through California.  By my napkin-tally math, since the lockout 50 times a team has travelled to California to play the Ducks, Kings, and Sharks in some sort of consecutive fashion, and in seven of those instances, the visitor has come away with zero standings points, as documented below.

In another seven instances, by the way, a visiting team has also come away with zero wins, but did at least get loser points in overtime.  Anyways, looking at the table, I suppose the requesting readers are right -- the BoC Consecu-Sweep is a rare enough occasion that when it happens twice in two weeks, it's time to get map-happy.

Click forward if you dare see the carto/porno-graphical blasphemy of a gloating Californian.


Enter at your own risk 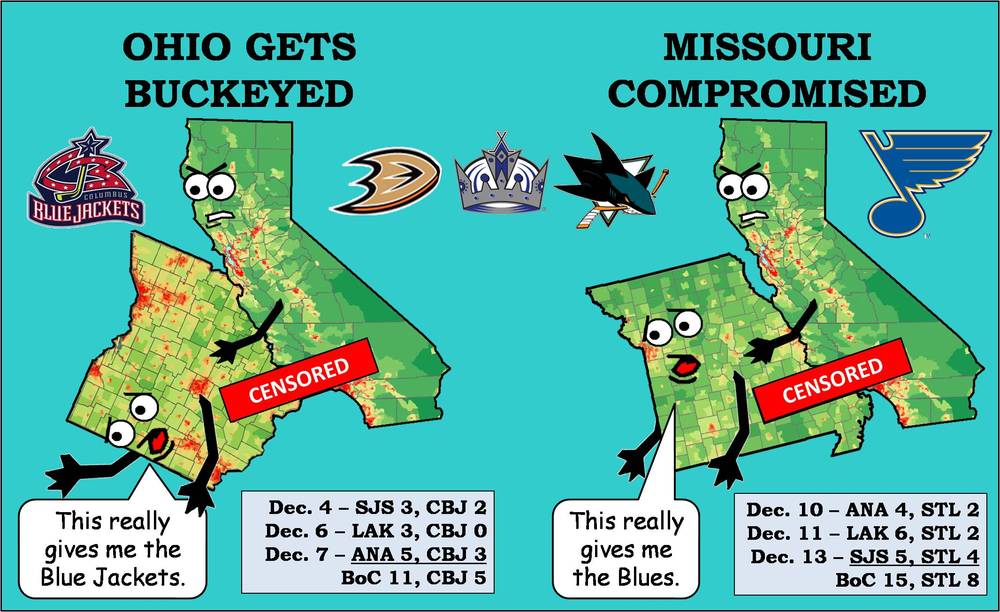 Hope you enjoyed your visit to sunny California.
Thanks for the six points.

Prediction: The Wild lost last night in L.A., but this is only a two-stop California trip. It doesn't matter, though; I think Minnesota is still sore from the inaugural State Rape cartoon. Ducks 4, Wild 1. Just like each of the 2003 and 2007 postseasons, the Wild only get one puck past J.S. Giguere.  Goals by Marchant, Kunitz, Pahlsson, and Hedican.  For some Wild perspective, go visit Hockey Wilderness, part of the SBN megaverse.