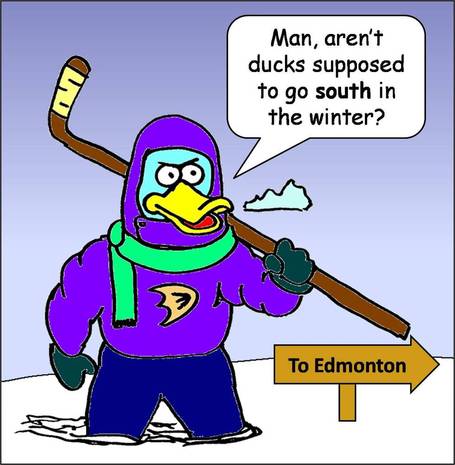 I don't have a whole lot today, except that Richard from Illegal Curve asked me to put together a quick two- or three-paragraph Ducks season review for a "State of the Pacific Division" feature they will be running soon. My summary probably runs just a bit too long, but in the spirit of multi-functionalism, I'll include what I sent after the jump. It's not heavily detailed, but I think it captures my mixed feelings about the Ducks season thus far.

Two months, more or less, into this 2008-09 season and a few things are becoming apparent about the Anaheim Ducks – (1) Unfortunately (for me), they are not the San Jose Sharks, tearing through the early part of the season like Sean Avery cuts through formalities. (2) Fortunately for me, they are also not the Dallas Stars, whose miserable season start left many hockey fans scratching their heads. Somewhere in the middle, along with 25 or so other teams, sit the Anaheim Ducks, and it’s tough to figure exactly where in that mix this version belongs.

I am perfectly willing to throw away the opening six games of Anaheim's season, where the Ducks went 0-5-1, had a 1-for-24 power play, and the five scoring forwards Getzlaf-Perry-Kunitz-Morrison-Selanne combined for a measly 3 points. In the 26 games since that horrid season opening (where the operative word was "Positivity!") the Ducks have put together a 16-7-3 record utilizing an above-20% power play conversion and have Getzlaf in particular sitting among the league’s top scorers. On paper the forwards look fantastic – I’m considering calling the Kunitz-Getzlaf-Perry line the "power play" just because they’re that dominant, and there’s signs that a Marchant-Morrison-Selanne line can offer some secondary scoring the Ducks lacked last season. Moen-Pahlsson-Niedermayer of course plays the murderers minutes against the opposition’s best, and some combination of Ryan-May-Carter-Parros is around to offer some fourth-line punch.

It’s the defense that has taken some rapid adjustment, and it’s all happened within the last few months. Even after Schneider was traded during training camp, I expected that the Ducks’ blueline would be almost exactly the same as the cup year, but then BAM! O’Donnell gets traded and BOOM! Beauchemin gets hurt for the year, and all of a sudden half the blueline is turned over. Fortunately, there’s still the two mainstays – Niedermayer and Pronger – and I’m of the belief that you can build a good blueline around those two guys plus four mannequins. It turns out that’s not entirely true, but the players who have come in have more or less been finding their way. Hedican, Huskins, and Montador are all seasoned players, and the Ducks brought up Brett Festerling to play alongside Scott Niedermayer, just like they did with Beauchemin three years ago. There’s still plenty of issues to work out, but I think it’s coming together, and Montador in particular is a standout. Goaltending is set, though – Giguere and Hiller have both been playing mostly excellent in net.

So it remains to be seen where these Ducks really sit, but it’s early enough in the season that not all questions need immediate answers – so long as they’re somewhat comfortably among the top 8, there’s still plenty to like about this Anaheim squad. They’ve got loads of experience, a hard-hitting style of play, and a loud-and-proud general manager. Whoops! Of course, that’s the side-story I’ve been neglecting to talk about – Brian Burke is now off to the Maple Leafs Old Folks Home, and has left his replacement with a largely clean slate – next summer will see a significant roster explosion (a move I applaud Brian Burke a ton for, by the way). To make things easier, here’s a list of who’s not becoming a free agent next summer: Giguere, Hiller, Pronger, Getzlaf, Perry, Kunitz, Selanne, Carter, and Ryan. Everyone else becomes a free agent (nearly all of them unrestricted), and it should be interesting to see where Bob Murray spends the freed-up dollars. Burke has certainly left the Ducks with several key players to build around, but there’s plenty of slots to fill and dollars to spend, too. Once these decisions get made, then perhaps I’ll know what sort of guy this Bob Murray fellow is – should be exciting.

Anyways, that's my take so far.  Feel free to offer your opinion of what sort of team we've got this year in the comments.

Prediction: Tonight the Ducks will be without J.S. Giguere, who is in Montreal to attend his father's funeral. Thus it's a rare occasion where Ducks fans know who will be tending net before the puck drops. Jonas Hiller has been playing excellent in net, but lately the Ducks don't seem inclined to score for him -- Anaheim has scored a combined three goals in Hiller's last three starts (all losses), and I'm hopeful that they can make up for some of that offensive drought tonight. Let's say Ducks 4, Oilers 2. Goals by Montador, Ryan, Pahlsson, and Morrison.