Welcome to the Battle of California

Share All sharing options for: Welcome to the Battle of California 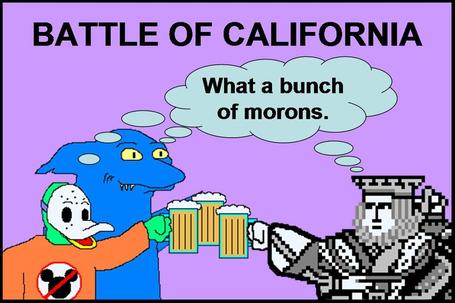 Welcome, strangers and friends, to the new home for Battle of California, now backed by the programming power of the SBN universe!  If all goes according to plan today, we should get all the archives from our old blogspot home at some point, and otherwise continue along as usual.

For those of you that are new to BoC, we are a multi-author, multi-team blog that covers the Ducks (Earl Sleek), the Kings (Rudy Kelly), the Sharks (Sharkspage's PJ Swenson, Mike Chen, and Cheechew), and occasionally the Stars (Cycle like the Sedins' James O'Brien).  I'm going to let everyone introduce themselves, if they choose, but it's a pretty good mix of a few different styles, usually with a heavy dose of irreverence.

For those of you that are not new, again, apologies for any inconveniences for the move, but hopefully there's some nice features you guys will enjoy.  If you read a good article on the web or find a cool YouTube that's worth discussing at BoC, there's a FanShot feature on the right sidebar where you can link it or display it.  If you draw an awesome cartoon or want to write an opinion piece yourself, you can create a FanPost.  I'm still early on the learning curve on a lot of these SBN bells-and-whistles, though, so sometime later I'll put together some guidelines about that.

In terms of the SBN hierarchy, we're actually not filling any of the 30 team slots -- Fear the Fin will continue to give top-notch Sharks coverage, and there's still a Ducks and Kings vacancy (well, check with Mirtle); we're outside of that system.  It's probably for the best -- we're not diligent enough to cover every game, and I've been way too happy with the BoC dynamic as it currently exists.

So bear with us as we get used to the new software -- we'll wait while you eagerly click on BoC's first advertisement :).  We're not really up to speed (heck, I'm still waiting for some of our writers to join the blog), but the major first step has been taken.

Welcome to the Battle of California 2.0, "sloppy seconds" edition.  Let's have a blast!