Versus blog post, Penguins and Flyers ready to make a midseason push

Share All sharing options for: Versus blog post, Penguins and Flyers ready to make a midseason push 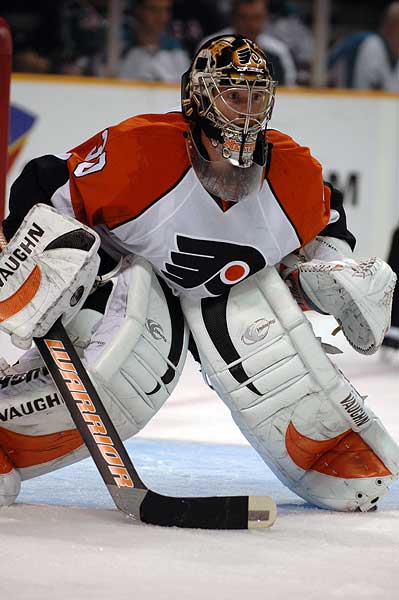 Versus asked me to preview tonight's 4:30PM (PT) matchup, Buffalo at Pittsburgh, and tommorow's 4PM (PT) matchup as the New York Islanders travel to Philadelphia. The preview and my post-Halloween mughshot is up here. The Denver Post's Adrian Dater previews the game through the vocal chords of Mellon Arena public address announcer John Barbaro here.

Penguins and Flyers ready to make a midseason push

The Pittsburgh Penguins and Philadelphia Flyers, fifth and sixth, respectively, in the Eastern Conference, are poised to make a mid-season push in the standings. The Buffalo Sabres face down the Pittsburgh Penguins at Mellon Arena on Versus Monday night and the New York Islanders travel to Philly to take on the Flyers in Versus’ match Tuesday.

Pittsburgh heated up in the month of November. The defending Eastern Conference champions registered a 9-2-1 record without the services of top offensive defenseman Sergei Gonchar (shoulder) or fellow blue liner Ryan Whitney (foot), who have been out since the start of the season. The Penguins generate the bulk of their offense up front, with Evgeni Malkin and Sidney Crosby combining for 83 points this season and running first and second in the NHL scoring race ahead of Washington’s Alexander Ovechkin.

Starting goaltender Marc-Andre Fleury went down November 15, and lanky 6-foot-4 200-pound backup Dany Sabourin has filled in admirably. Sabourin is one of the tallest netminders in the NHL, able to block a considerable amount of the net up high when he goes down. Solid positionally, Sabourin is playing confident in net and stabilizing the Penguins through an injury-riddled stretch that could have taken a significant chunk out of the season.

The Sabres are a team trending in the opposite direction. Buffalo snapped a three-game losing streak and a deflating 2-8 run with a 4-3 win over a last-place Tampa Bay Lightning team on Saturday. Center Derek Roy notched the game winner against the Lightning, but the Sabres were 0-for-6 on the power play and they were dominated in the face off circle, 32-18.

One bright spot is the Buffalo PKl, which has killed 22 straight and is third best in the league at 88.1 percent. Defenseman Craig Rivet returned from an undisclosed upper body injury Saturday, so his presence should keep the unit strong.

Keep an eye on Nathan Gerbe, who made his NHL debut against Tampa Bay. Gerbe, a Hobey Baker finalist at Boston College, registered 14 goals and a rookie-leading 24 points in 21 games for the Portland Pirates of the AHL. He recorded four shots on goal and a plus-2 in 15:09 of ice time against the Lightning.

The Flyers are also making a strong push in the standings registering an 8-1-2 record over the last 11 games. Philadelphia is piling up points with a balanced offense, a deep blue line, and the goaltending of Martin Biron and Antero Niittymaki. Center Mike Richards is following up his breakout season of ’07-08 with 11 goals and 28 points in 26 games. Richards developed the killer instinct offensively this season, regularly lighting the lamp with highlight-reel goals. With Jeff Carter split on a second line with Scottie Upshall and Scott Hartnell, the Flyers have too many offensive weapons for opponents to shut down effectively. Carter enters play Monday with 19 goals, which is tied for the league lead with Buffalo's Thomas Vanek

On defense, Randy Jones (hip) and newly-acquired Matt Carle (back) are expected to return to the lineup shortly with Ryan Parent expected to return later in the month. With a top three of Braydon Coburn, Kimmo Timonen and Osi Vaananen, the Flyers could have one of the best blue lines in the league when healthy. A goalie rotation will help keep Biron and Niittymaki fresh during a marathon 82-game regular season, but eventually one will emerge as the go-to netminder for what is expected to be a long playoff run. As far as this season is concerned, Biron has not yet grabbed the reigns, which he did last season.

The Islanders are another team slumping toward mediocrity. Joey MacDonald, starting in his 16th straight game against Atlanta on Saturday, regularly provides the third worst team in the NHL with a chance to win. The backup to injured Rick DiPietro has not received a lot of offensive support. The Islanders have been outscored 10-3 in their last two games, and only Trent Hunter (11) and Bill Guerin (10) have reached double digits in goals scored. Right wing Kyle Okposo (hand) and center Mike Comrie (hip) are two offensive options that are not expected to return to the lineup in the near future. The Islanders need a Mel Gibson "Braveheart" speech from Guerin soon before the season slips away.

Hello to SB Nation. The Anaheim Ducks travel to HP Pavilion for their third meeting of the season this Thursday, it might make for a good liveblog opportunity and a good way to kick off my posts on the new blog.