Share All sharing options for: Ducks Gameday—Streak Comparison: This Season vs. Last

For today's post I threw together a comparison table looking at how the Ducks and Red Wings have been performing compared to a specific stretch of games last season. For the Ducks, the selected stretches have been hand-picked from each season:

This one's much more obvious: I'm just looking at how Detroit's "hangover" start (15-4-4) compares to its season start from last year (15-6-2). Now I don't want to read too much into these early-season comparisons, but I think it's worth noting that while each of these teams have actually improved their ability to accumulate standings points (for a stretch, anyways), a lot of the underlying numbers have gotten worse. Let's take a look: 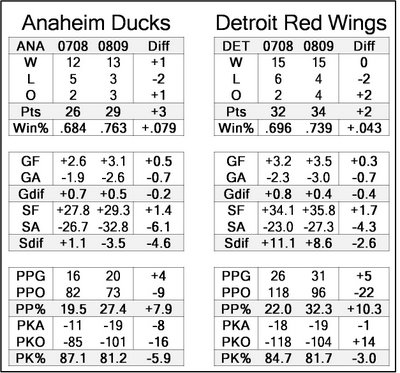 Patterns: For both the Ducks and Red Wings, the current-year versions have been surrendering way more goals than they did last year -- each team is giving up around 2/3 an extra goal-per-game, with some of that comes from a declining penalty kill. Each team has found a way to generate wins despite a shakier defense, though, mainly through an improved team offense.

Offensively, one of the keys has been each team's power play, which has for each team produced more power play goals in fewer power play opportunities than the year before. Overall, each team has improved its offense, though not by the same margin that the defensive numbers have changed; each team this year has a worse goal-differential-per-game than the previous year.

Shot analysis shows a similar story: shots-for per game are marginally improved, but shots-against per game have increased even further; the net shot differential has gotten worse this year for both squads (the Ducks, in fact, are now typically outshot).

So basically, what does this mean? Both squads have shown an improved ability to accumulate standings points this year vs. last year despite some declines in the differential statistics and underlying numbers -- in a way, this suggests that the current win pattern is a bit illusory. I'd expect that each team would have gotten worse results with the current year's statistics, but at least so far, that hasn't really been the case. I wouldn't worry about these patterns just yet for either team (there is absolutely nothing wrong with illusory win streaks in November), but here's some open-ended questions for the comments:

Prediction: Now that I've demonstrated a more offense-friendly tendency for both the Ducks and Red Wings, we're probably in for a tight defensive battle tonight. Ducks 2, Wings 1. Goals by Ryan and Pahlsson. For your Wings coverage, there's always A2Y, Winging it in Motown, and On the Wings.