Instead of talking up this Chicago rematch, I'm going to throw my two rambly cents in on the Avery suspension. I don't like it.

Now don't get me wrong; there's a lot to dislike about Avery, including this recent set of inflammatory remarks, but you have to recognize Avery for what he is -- a sensationalist media creation. Over the years, reporters have glorified his personality and encouraged his bad boy behavior (which I can understand -- NHLers are generally too boring for newsstands). And that's the thing -- I do believe Avery's statements were intended more to feed the hungry media than they were to hurt Dion Phaneuf / Elisha Cuthbert's feelings. He was doing what he was expected to do -- agitate and entertain -- and more or less in the manner that he was trained to do. 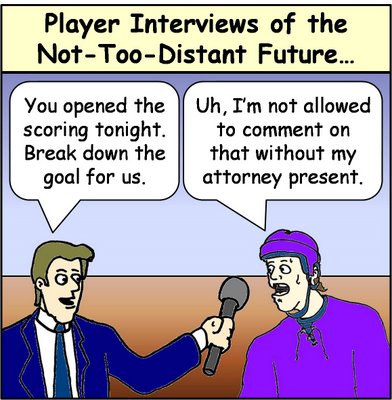 It wasn't out of line with the media characterization that was built up over his career, nor with the persona that the Stars signed last summer. I dunno, it's like giving a dog a treat for coming inside six days a week but then beating it for doing so on Sunday -- maybe there was a vague line that was crossed, but I don't think Avery thought he was "detrimental to the League". If anything, he was promoting the league in the best way he knew how.

Sure, it's not normally acceptable behavior to be calling out players for their love lives, and we can debate the shock value of the words "sloppy seconds" compared to other word choices, but it's not as if this elephant wasn't already in the room -- Avery did manage to get himself in trouble without naming a single name. In a practical sense, Avery took a topic that dozens of hockey writers have already made crude jokes about and then shockingly made one himself.

In short, Avery was Avery, and the NHL suspended him for it without any strong precedent. As an isolated incident involving a rival team, I probably don't care about this that much, but I do worry about where it leads. We're already in a period where player interviews are purposefully bland and carefully measured, and while Avery is certainly not the model of ideal media interaction, he was different from the robotic mold and punished because of it. Going forward I think the NHL should probably publish a list of do-not-discuss guidelines -- it's a sham that they can't define a social barrier until after it's been crossed. Even so, as I point out in the cartoon, I suspect we'll see even less personality in front of a microphone from players in the future, and that general insincerity will probably be another barrier between the players and the fans, and that's sort of a shame.

Sean Avery is no hero, and I don't mean to present him as even a likeable figure, but it's really tough for me to see the rationale for the league's suspension. I think it's a dangerous path to discourage personality in front of the microphone without any specific guidelines, and we're probably in for a blander NHL as a result (though in fairness, we were probably in for that anyway). Anyways, I'm open to being convinced -- feel free to agree or disagree or add your own two cents in the comments.

And now to the part where Sleek gets suspended:

Listen, I love Canada. It's just when it comes to Battle of Ontario teams hiring head coaches and general managers, they really seem to have fallen in love with Anaheim's sloppy seconds. I don't know what that's about.

Ron Wilson, Craig Hartsburg, Bryan Murray, and Brian Burke --
That pretty much spans the entirety of Anaheim's history right there.

Prediction: Last Friday the Ducks and Hawks skated to a 1-0 game in Anaheim, so I suspect Hiller might get the start tonight, but there's no real wrong answer in net right now. The Ducks do need to start scoring some goals, though, so let's say Ducks 5, Hawks 3. Goals by Getzlaf x2, S. Niedermayer, Pahlsson, and Perry.