OK, not really. For some reason I felt the need to look up Rudy Kelly on Google and came across the other Rudy Kelly. One whose passion includes "... his two terrific boys."*

When typing that name into Google, the expectation was that there would be a bunch of BoC links and maybe a few livejournal love letters but instead we get alternate Canadian universe Rudy.

I guess the biggest question is: does our Rudy love Mel Gibson?

More fun after the jump.

* Don't you love that out of context quote? Hold on, I think the producer from The O'Reilly Factor is calling ...

One of the best things about NHL '0<s>8</s>9's Be a Pro/Online Team mode is that it gives you a sense of how chaotic it must feel like to play professional hockey. These documentaries also capture that spirit: watching Clowe on the ice reminded me of some of my lower moments of "athletic" competition.

(In my case, the anxiety of being a weak dribbler parallels the feeling of having very little time and space with the puck.) 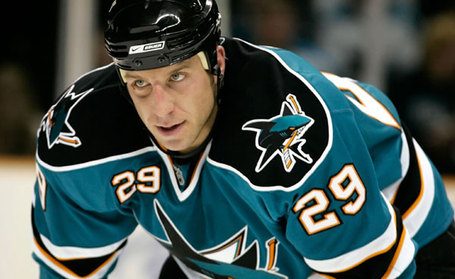 The best stuff might be the locker room scenes. San Jose certainly has its fair share of tricksters. They even have goofy secret handshakes.

Also, Clowe seems like he has a slight lisp. Not sure why I mentioned that but Sean Avery is nodding intently right now.

Either way, it's something I regret. Do relay fond memories of that series.

First they were smothered with a pillow by the Detroit Red Wings 6-1. Striving to prove the doubters wrong, the Stars showed they can lose a low scoring game as well, losing 1-0 to the Coyotes in a game that was a double shutout before the shootout. (Cannot believe I didn't invert those two words)

So that's one goal in two games for the Stars.

The good news is that they are still within 5 points of the eighth seed with a couple games in hand, but even more bad news is that the Blue Jackets are looking more and more like a playoff team. 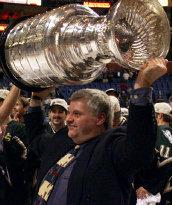 Could this year be the revenge of Hitchcock?

Even though they've lost Derick Brassard for the season and face injuries to Rick Nash and Kristian Huselius, the BJs look like they have the makings of a playoff team. Sleek, my guess is that Steve Mason will erase any worries you have about Bobby Ryan earning a Calder this year.

Phoenix and Anaheim look like they are creating some serious distance from the Stars. The outlook for a playoff run is looking pretty grim compared to last week, so this three game homestand needs to be successful.

Is it time to call this a lost season yet?