Hey, I'm going to blow your mind right now.  Like, your life will never be the same after I tell you this bit of information.  In fact, you might just want to go over to Mirtle's site or WWTDD instead to protect your fragile little brain from the information I'm about to share .  OK, still here?  Alright, but remember, you asked for this: 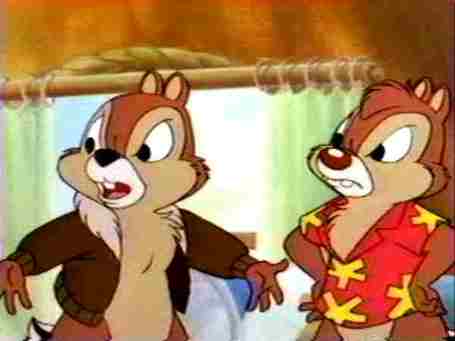 What.  I don't know what it is about that little tidbit that fascinates me, but my brother mentioned it to me yesterday and I can not stop thinking about it.  Maybe it's because it's so obvious and I never noticed it.*  I'm usually good at this sort of stuff, but I guess my radar wasn't as well-developed when I was 5.  What other TV shows of my youth had adult references?  What's next, I'm going to find out that Gummy Bears was a veinly theiled allegory for the Hundred Years' War?  Did Launchpad McQuack model himself after David Lloyd George?  These are things I must know.

*Now that I think about it, Gadget was pretty obviously gay.

Oh, and for your consideration on a lazy Sunday afternoon: what was the better Launchpad show, Duck Tales or Darkwing Duck?