When it comes to gameday headings like the one directly above, I always oversimplify conference rankings. I willfully ignore divisions and games-in-hand and simply just show a team's points-rank in the conference, and most of the time, it doesn't really matter.  However, for the Ducks and this stretch run, t-6th in west definitely overstates Anaheim's current position.  Because of a road-heavy schedule and fewer games remaining, the Ducks are now fairly significant underdogs to make the postseason.  Look at these odds, which ignore the west's top four seeds:

All these percentages are courtesy of Playoffstatus.com (H/T to Matt from BoA for the link), which I assume plays out the remaining schedule using previous-performance-based percentages hundreds of times.  While certainly nothing is assured about the outcomes, it does say that if the Ducks play the way they have (along with 29 other teams), the likelihood of a postseason is not good -- and even if the Ducks do make it, it's likely to be a series that starts in San Jose or Detroit.

Now I'm not a guy who typically focuses on pessimism and gloom, but I think it's important to keep a sense of where the Ducks currently sit as the team approaches a trade deadline with eleven soon-to-be UFAs (Scott, Rob, Pahlsson, Moen, Morrison, Marchant, Beauchemin, Montador, Huskins, Hedican, Parros) -- while I don't think that all these names are movable, and I do expect some of these to re-sign, I can't get around this fact: even if they do play lights-out in the next couple of weeks, the Ducks should probably be sellers this year.

Who should the Ducks unload?  Niedermayer or Pronger?  The stopper line?  I'm not sure -- it all depends on trade return.  As you'll see after the jump, the Ducks do have a lot of roster holes to fill for next season.

Now to be clear: just because I'm looking ahead to next year's roster or talking about unloading at the deadline doesn't mean I've given up hope for the remainder of the year.  It's just that trade decisions will need to be made in the coming weeks, and it's deathly important to keep sight of what's brewing for 2009-10.  I've put together a handy chart to show what Bob Murray is starting with for next year's team. 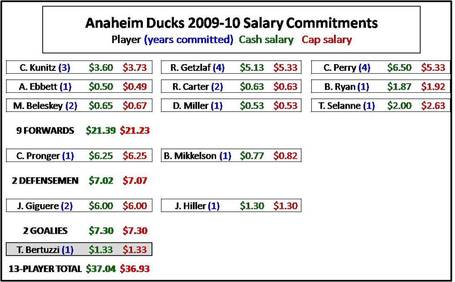 All salary data courtesy of NHLnumbers.com. Click image to enlarge.

A few quick notes: I've included both actual and cap-math salaries (green and red, respectively); generally I assume the Ducks should care more about actual spending than averaged salaries. Oddly enough, on a cash basis Corey Perry looks to be Anaheim's best-paid player next year.  Also, Bobby Ryan's numbers include $1.1 in bonuses -- I don't know how he earns them, but they're there, along with small bonuses for Beleskey and Mikkelson.

Generally, there's a lot to like about this framework-of-a-team, though there's certainly a lot of work to be done, especially on the blueline.  There's some hefty salary already allocated, but the goaltending and scoring forwards seem to be fixed into place.  The main question I have when I think about next year is identity -- what sort of team does Bob Murray want in 2009-10?  For years, the Burke teams have been about fighting, defense, and penalty-killing, and have focused more on low-scoring victories.  With these players locked in, however, there is an opportunity to change focus: with Getzlaf, Perry, Ryan, and Selanne the Ducks could go for more of a high-scoring offensive angle -- and it's tough for me to say that I wouldn't approve of it.  I really don't know where Bob Murray sits on this issue, but I think it's something that should be addressed and decided pretty soon.

I'm getting a bit rambly -- my main points for today are thus: (a) the Ducks' current position is one of longshots to make the postseason, (b) the Ducks have a boatload of building to do next summer, and thusly (c) I hope to hell that Bob Murray is contemplating "seller" trade offers -- even if the Ducks improve their postseason hopes, there's loads of playoff-tested UFAs that shouldn't all leave for nothing.  The Ducks need to decide what sort of team they want to be next year, figure out who fits into that plan, and trade some of the bodies that aren't in the cards.  Who might that be, and what would the Ducks likely covet?  More coming tomorrow.

Prediction: One thing I can fault the playoff-odds calculator for: all its probabilities are based on games played in the Chinese Zodiac Year of the Rat.  Yesterday was the start of a new year -- Year of the Ox -- and hopefully with it comes a noticeable shift in fortune.  Ducks 5, Coyotes 3.  Goals by Getzlaf, Ebbett, Ryan, Pahlsson, and Montador.