Now that every game counts ...

Share All sharing options for: Now that every game counts ...

The Stars host the Atlanta Thrashers tonight. It's oddly fitting that these two teams will meet right after the All-Star break, since those two Southern markets hosted the last two All-Star games before Montreal.

(File that tidbit under "Things Even Less Relevant than the All-Star Game.") 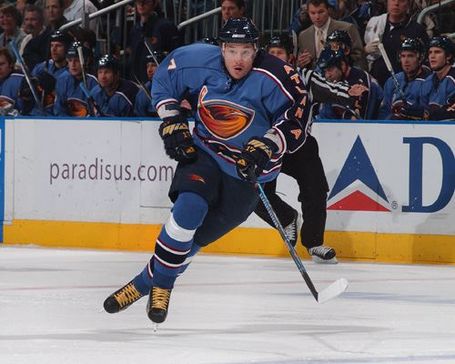 Mike Modano and Stephane Robidas will come back from All-Star appearances, along with Atlanta's Ilya Kovalchuk. The big news out of HOTlanta lately is the team crowning Kovalchuk as its captain. It might not be enough, but at least they're trying to show their appreciation for the Russian star.

My suggestion to the Thrashers: hold onto Kovie for dear life. He's easily one of the best snipers in the game (right behind Alex O and Heater, I'd say). Who knows what could happen if the Thrashers win the Tavares sweepstakes? Perhaps lady luck will shine on Atlanta in the long run.

As for the Stars, these are the games that could make-or-break their playoff run. Atlanta is an inferior team from the Eastern Conference. It's a home game. Anything short of a win must be considered a failure.

It's also their easiest game for quite a while. After tonight, the Stars will almost certainly be squashed by an angry Detroit team who will enjoy the "return" of suspended All-Star hookey players Nicklas Lidstrom and Pavel Datsyuk. They will be motivated (and they're at home). After DET it's a trip to Hitchcockland against the CBJ's, a big game against one of the Stars bubblemates.

If the Stars can pull four points out of the next three games, they'll be in very solid shape going into the friendliest part of their schedule. With 10 of their 13 games at home in February, the Stars should know quite soon if they can take advantage of their 35 percent odds to make the playoffs.

As just about any hockey fan with half a brain would surely agree, Nicklas Lidstrom is a no-brainer as one of the two best D of the decade. But who fits into that No. 2 slot? Could it be "Stompy" or Scott Niedermayer? Or perhaps someone I snubbed like Sergei Zubov?

Later this week I'll do a rundown of some of the worst and best contracts in the division.