Yeah, I know I said yesterday that I was going to write something up about the assets the Ducks could sell going into this trade deadline season, and I will get to that pretty soon, but (a) the trade deadline is still a ways away, (b) I'm too lazy to update my spreadsheets right now, and (c) among the players I was going to talk about (the checking line and Niedermayer/Pronger, mostly), who didn't have a hell of a game last night?  Their winning performance is too fresh in the memory -- can't let that taint our thinking.  Plus who wants to update spreadsheets?

Instead, I'll just spend an extra day on the whole Year of the Ox wave that appeared to help the Ducks win convincingly yesterday. 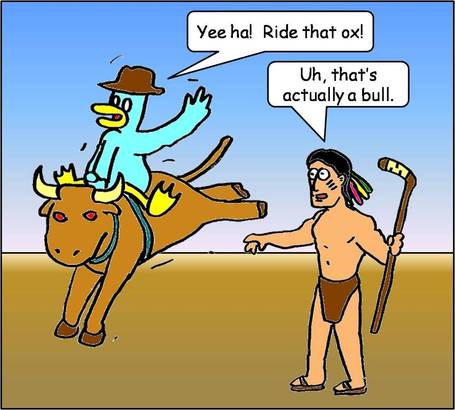 This seems a way for the Ducks to get featured on Versus.

It's only been one game thus far played in Year of the Ox, but the Ducks scored seven goals -- something they hadn't done in any game during Year of the Rat -- and their power play chipped in with a smooth 1-for-1 efficiency.  I'll take it.  Also it's worth noting that megakid Bobby Ryan scored his tenth goal of the month of January last night -- and he wasn't even on one of the two best forward lines of the night.

Prediction: Unfortunately, I won't be around for game comments tonight, but I'm trusting that the web-footed ones can carry on without me.  Tonight's primary question: which J.S. Giguere will show up?  Ducks 5, Hawks 2.  Goals by Ryan, Ebbett x2, Pahlsson, and Perry.