The good, bad and ugly contracts in the Pacific

Share All sharing options for: The good, bad and ugly contracts in the Pacific

One of the most talked-about columns this week involved the "scariest" contracts in the NHL. (Pour out a 40 for my homie Alexei Yashin)

Even before that, when I was taking a look at the could-be-improving future of the New York Islanders, crunching numbers at NHLSCAP.com became a mild obsession. Why not take a look at each team in the division, then?

It could be time to brace for a whirlwind of change in Duckville next year. With only Chris Pronger under contract D-wise (not counting minor leaguers), the personality of their blue line could change drastically. It's hard to imagine Scott Niedermayer coming back again, so could the Ducks be an unexpected spot for a guy like Jay Bouwmeester?

Even though the post-Burke Ducks have plenty of questions to answer, their cap situation is pretty damn impressive. Ryan Getzlaf kind of looks like a douche bag, but he's also one of the best centers in the NHL. Where he ranks on that totem pole is hard to say, but at $5.325 million per year through 2012-13, he might just be the best bargain in the league. 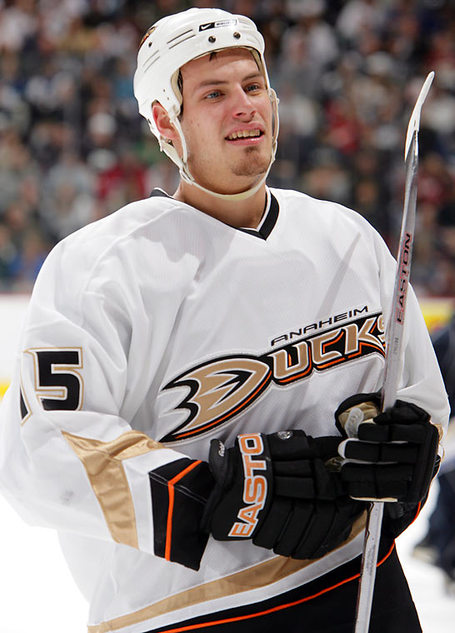 Corey Perry comes at the same price too, which is a brilliant brushstroke by Burke. The Ducks' two cornerstone forwards can rest assured that their feewings won't be hurt.

The Ducks are in a nice spot at $34 million. As Sleek mentioned, J.S. Giguere and Jonas Hiller combine for $7.3 million next season, which might be the worst value on a squad that ranks high in "bang for the buck." Then again, with a weak goaltending market, the Ducks boast one of the best big game goalies in Giguere and a very solid backup in Hiller. Cannot complain too much there.

Once the Ducks sign Sammy Pahlsson, they can focus on improving the team's offensive depth or adding another stud D. What direction should the Duckies go in next year?

(And should they trade Pronger? I'd say "no" but it's certainly an interesting topic ...)

The scary thing for the Dallas Stars is that, compared to their Pacific competition, the window might be closing. It's not all bad in Dallas, just pretty damn bad. OK, it's almost all bad.

Let's start with the ones that are promising. The closest answer the Stars have to Perry-Getzlaf is Mike Ribeiro and Brenden Morrow, in both productivity and value. Morrow's contract is the best: he'll be only a $4.1 million cap hit until 2012-2013. Ribeiro's not too bad himself, providing a point per game type output for $5 million per year (also ending in 2012-13). Those years should cover the last prime years for both players with Ribeiro being 28 and Morrow 30. 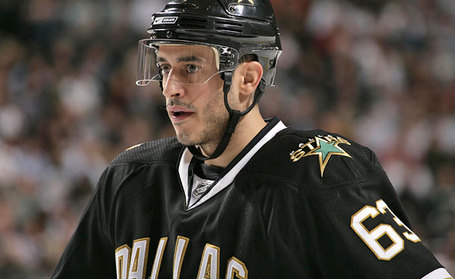 The other solid deals run out soon but provide crucial value. Not sure if Stephane Robidas is a full-on All-Star, but for $1.5 million next year he's a steal. Trevor Daley also has a decent contract, making $2.3 million next year.

Matt "Richard" Niskanen and Nicklas Grossman will finish their rookie contracts next year, so that gives the Stars four decent starting defensemen. With a tight cap coming up (about $40.5 million devoted to 15 players), it might not be reasonable to target a Bouwmeester type blue chip.

Depending on price, the Stars might be wise to shoot for a good veteran like Mattias Ohlund.

Offensively, the Stars are stunted by some dead weight and some rough deals. Sean Avery's $3.87 million cap hit was listed as the Stars scary contract and with good reason. It is a waste of money in every sense of the word.

But Brad Richards still has one of the worst contracts in the NHL, despite decent production. If getting a superior talent in Vincent Lecavalier at nearly $1 million less per year (Vinny L's hit is $6.9) counts as frightening, then how scary is Richards' $7.8 million cap hit?

Between Richards, Avery, Morrow and Ribeiro the Stars have just a hair under $21 million committed to three solid forwards. What happens if the salary cap falls?

Considering the state of the Pacific division, it would be hard for the Stars to justify being within a stone's throw of the cap ceiling if they don't make the playoffs this year.

The Kings absolutely have a bright future to look to. There's no doubt about it. The team is just chock full of budding D and bargains (with a few bumps and bruises).

My favorite contract has to be Dustin Brown's. His cap hit is only $3.175 million per year through 2013-14. Considering Brown's penchant for head bussin' and his improving scoring ability (not to mention his recent All-Star appearance), it might be the best deal in the division. If not the league. 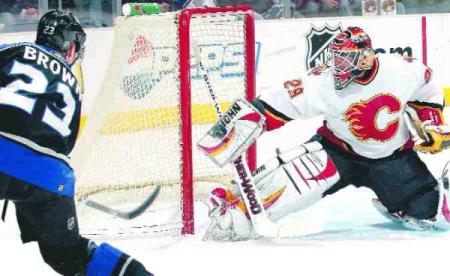 The one good thing about Jack Johnson missing most of the season is that it might make the perennial prospect more affordable. It will be interesting to see what kind of deal the Kings sign him to. (Dare I ask if Johnson is tradeable with all the other great blue chip D in their system?)

Anze Kopitar is not worth $6.8 million just yet, but that could still be a reasonable contract as the Kings improve. Ultimately his deal is market value (in other words, not great but not awful).

The only deals that are "meh" worthy are probably for Michal Handzus ($4 million) and Jarret Stoll ($3.6 million). Still, most NHL teams would be able to live with those contracts.

The Kings look like they'll be going into the season with about $40 million in cap space plus whatever Johnson gets. They'll have to decide what direction they want to go in goaltending-wise (it might be prudent to bring in a decent veteran on a short-term deal).

What's truly interesting is that the Kings could add a legit free agent forward. It sucks for them that Zetterberg won't hit the open market, but maybe Johan Franzen could be had. (I was told that Marian Hossa is out of the question ... why?)

Either way, the Kings look great. As long as they aren't dumb enough to waste their money on Broken Marian Gaborik.

In a world where every team could spend to the cap, the Coyotes would be an absolute force to reckon with. Gotta love the contracts for their top forwards: Olli Jokinen's just right at $5.25 million and Shane Doan is a steal at $4.55 million for three more seasons. 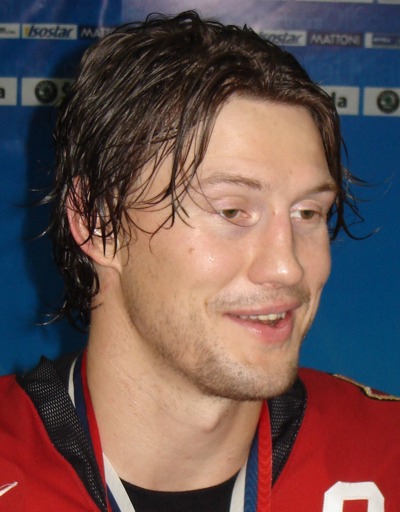 It never hurts to have young, cheap stars-in-the-making either. It will be one year before the Coyotes have to re-upp Peter Mueller ($1.7 mill) and two more for Kyle Turris ($2.7 mill).

He's had some ups and downs in his first full season as a starter, but Ilya Bryzgalov's $4.25 million cap hit is about right for a young no. 1 goalie.

With Derek Morris and his humorous $3.9 million per year hit coming off the books, the only questionable deal is Jovocop's $6.5 million salary. Jovanovski is a nice combination of physicality and offensive talent, but he's just too injury prone for a team that needs to make every dollar count.

The Coyotes might usurp the Kings as the team of the future if it weren't for their oft-referenced financial "troubles." Since my knowledge of their problems is limited and I don't want to piss off the guy from Five for Howling, I'll just stay away from that sticky situation.

For a team that was compared to the pre-lockout Colorado Avalanche, the Sharks are still in pretty decent shape going forward.

Much of their cap space will be accounted for next year: they'll be starting at $46.75 million. Really, though, the Sharks have most of their core intact next season. It's the 2010-11 season that will be tough: that's the year both Devin Setoguchi and Joe Pavelski could attract some Kevin Lowe-down offer sheets. 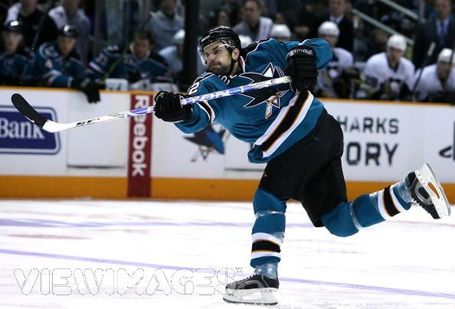 It's not every day that a $7.2 million cap hit is a steal, but it is for Joe Thornton. He took a discount to keep the Sharks competitive. Last year he was the hottest trade rumor gone un-traded, but Patrick Marleau is now quite reasonable at $6.3 million.

The biggest steal is probably Marc Edouard Vlasic's deal which goes for $3.1 million per year until 2012-13. Vlasic's gotten some rave reviews but I'll let our Sharks pundits cover that base.

After putting up a great season, is Dan Boyle's contract really that "scary" after all? Well, it's at least satanic: his cap hit is a devilish $6.667 per year up to 2013-14. The biggest issue is age: he's already 32 years old. It's hard to imagine him being worth that much once he hits his late 30's, but right now it's worth it.

As you can see, each Pacific team has its strengths and weaknesses. Overall, the division is chock full of great values (particularly in deals for team captains and power forwards) with only a handful of albatross type deals. Every team is better than the woeful New York Rangers, who better hope they get more out of Scott Gomez, Chris Drury and Wade Redden or they're going to be in the same rut Glen Sather got them in before the lockout.

Which team has the brightest future from next year to five years to 10 years from now? Who has the best contract in the division? I'd like to hear what you cats think on these subjects and more.