There's been some response to the playoff-odds calculator that I linked to a few days ago -- notably a rival site Sports Club Stats has sent me a link to their Ducks playoff odds site, which looks pretty damn thorough.  If you spend some time to figure out how to read it, it shows you the impact of every night's game on the Ducks' postseason likelihood -- last night, for example: the Ducks' chances were hurt by a Blue Jackets victory over Ottawa, but they were helped by a Calgary win over Nashville, and an Edmonton regulation win over Minnesota was sort of a push.

It also shows how playoff likelihood has plummetted for the Ducks over the past month-plus, down from a 2/3 probability in mid-December down to today's 37.9%: 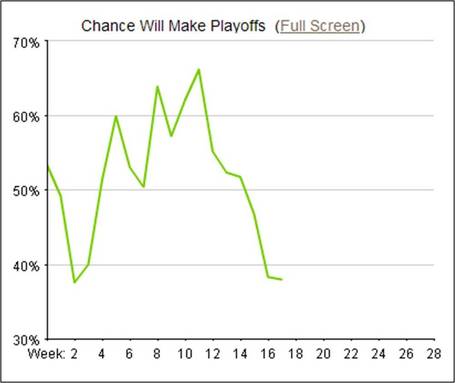 Apparently the Ducks are now as bad off as they were after their 1-5-0 season start. Yuck.

This grid is pretty impressive, too, which charts out what probably will happen if the Ducks end with different records in their final 31 games: 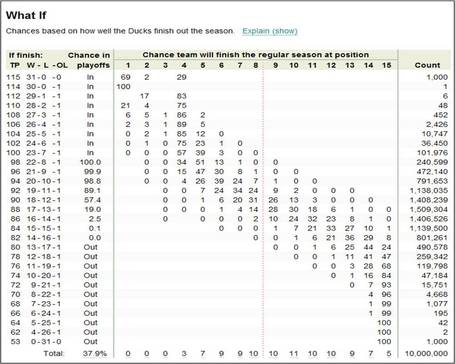 10 million scenarios played out seems pretty impressive, but why stop there?

So the lesson? It's an uphill battle for the Ducks, that's for sure.  But the other lesson?  These days we have computers voting for All-Star Games and nightly calculating who to root against -- we have reached the age where a computer is a better hockey fan than I am.  At last.