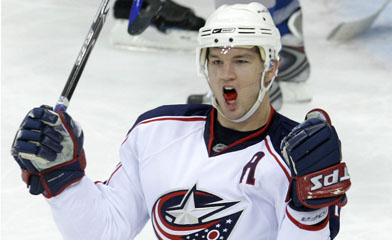 Anyway, the Stars play in Columbus tonight off of an emphatic 4-2 win in Detroit. Now Marty Turco has a playoff AND a regular season win on the road against the Red Wings. The monkey's not off the back yet, but it is worried.

Columbus is in a semi-comfortable spot in the big bundle around the bubble. Here's a look at the bubble teams. (The formatting is a bit whacky, so click on the link if this makes your brain turn to mush.)

So, it seems like the Jackets and the Stars are playing rather comparable hockey right now. According to the super-spiffy playoff picture Web site that Sleek championed, Columbus has a 57 percent chance of making the playoffs versus the Dallas Stars, who have a 49 percent chance.

At a 15-7-1 rate, the Jackets are outstanding at home (you have to think they're hoping to luck into the fourth seed considering their weakness on the road). My guess is Columbus is so good at home largely because Ken Hitchcock + the last change = death for offense. 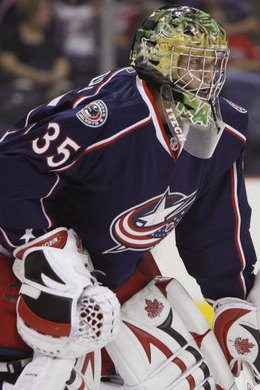 The two big names for Columbus are Rick Nash and Steve Mason. Nash is a man of highlight reel goals and has become a much-improved two-way player under Hitchock's watch (46 points, +12). Mason's the odds-on favorite for the Calder trophy and even has a shot at the Vezina as well (19-11-2, 1.98 GAA, 92.8 percent save pct., 7 shutouts).

Just looking at the Blue Jackets home record, it's hard to say that the Stars are the favorites. But Dallas has won their last two games by two goals, including the mighty Red Wings. Then again, Columbus also beat Detroit (although that was, infamously, without Pavel Datsyuk and Nicklas Lidstrom).

Since I've been almost uniformly wrong about the Stars so far this year, how about ... Blue Jackets 2-1?