Share All sharing options for: Ducks Gameday—The Coyotes Catch Up 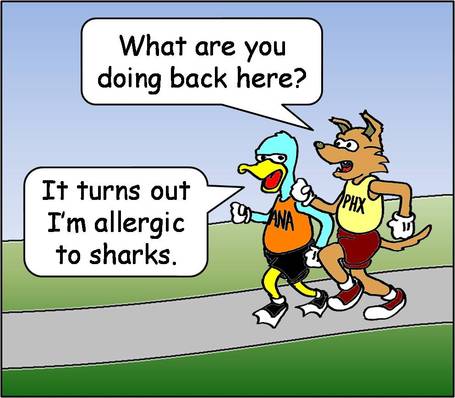 Yeah, at least that's what I keep telling myself.

The Desert Dogs come to town tonight with the hopes of kicking the Ducks while they are down and thereby passing them in the Pacific standings.  It's Sunday, so I won't write too much, but here's two things I will be covering in the next week -- feel free to comment on them now.

First off, local brat Corey Perry has been suspended four games for his Pronger-like elbow in Friday night's game.  Ironically, Perry's elbow will miss twice as much time as Pronger's elbows combined, but whatever.  Perry and Getzlaf could certainly use a wake-up call when it comes to extracurricular penalty fun, that's for sure, and I have no objection to seeing more of Ryan, Morrison, and Ebbett.

Secondly, though, it's about time I wrote something about the silly All-Star Game voting that made the Ducks one of four (!) NHL squads represented among the 12 starters.  Now this isn't my doing -- I didn't vote once, nor have I urged anyone to -- and I haven't written about this year's vote one bit this year.  Generally, I'm not as rigidly against Anaheim representation in the ASG this year as I have been in the past, but it's still not a big deal (at least Giguere and Getzlaf won't be getting new contracts soon). Still, I am amused at weird levels of backlash against this vote -- somehow in the last 12 months becoming an ASG starter has become quite an honor, unlike last year when only 8 of 12 voted starters actually showed up to the event.  Also, keep in mind that in last year's ASG, the opening shift lasted approximately 49 seconds (but did actually feature a goal).  Yippee!

I'll write more about each of these in the coming week, as well as coverage of a BoC mega-event!  (Well, maybe that's overstating it, but Rudy and I are going to Tuesday's Ducks/Kings game).  Stay tuned!

Prediction:  In a game that's not being televised, it'll probably end up one of the most would-have-been-great-to-watch games of the year.  If anybody has any free internet feeds to share, throw 'em in the comments.  Ducks 5, Coyotes 1.  Goals by Kunitz, Ryan, Montador, Pahlsson, and Moen.  As always, Five for Howling has your canine angle.