'Lotta history down that ruuud

Share All sharing options for: 'Lotta history down that ruuud 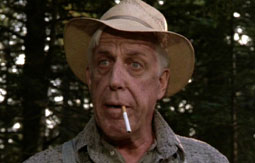 Ever since, oh, November it's been obvious that the Stars need only to click on the "Conference" link for ESPN's NHL Standings and ignore any dreams of winning their division. There was a sliver of time when this didn't apply to the Anaheim Ducks but now that experience is shared by every non-stick-biting team in the Pacific.

As the Ducks fall back to the pack (a drop that not-too-surprisingly coincides with the Finnish Flash's gnarly thigh injury) and the Phoenix Coyotes stay in the playoff picture, it's looking more and more like this year's playoffs will accomodate the top three Pacific teams.

If you ask me, that means that the 'Yotes and Stars are jousting for a 7th or 8th seed. 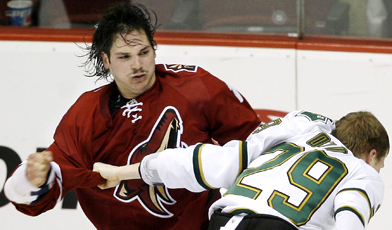 But just in case the Ducks spit the bit and go from my Stanley Cup pick to missing the playoffs, let's compare the three teams' schedules:

It could be that the rest of the season will be a grind for the Stars, but don't be surprised if that last road trip makes-or-breaks their season. (If they can survive that tough month of March)

The Coyotes have a few really rough stretches left this season.

First, there's a key four-game road trip against the Western Conference's bubble teams: Minn., Van., CGY and Edmonton. Winning those games would give the 'Yotes a nice amount of breathing room.

The most brutal stretch is more trying than anything the Stars will face for the rest of the season. Phoenix has a three game road trip and a five game road trip with a home game against St. Louis sandwiched in between. Eight of nine games on the road for a team that struggles with consistency? Yikes.

Their last month of the season might be rough on a West coast team, as they ping pong back and forth without consecutive road or home games. On the bright side, the Coyotes have two three game homestands and one four-gamer.

Though the Coyotes face sharper peaks and valleys, the Ducks' schedule is pretty rough itself.

They have a five game road trip this month that sends them all over the States: from Pittsburgh to Minnesota to NYR and Islanders all the way back to Phoenix. The Ducks might luck out with struggling Penguins and Wild clubs (and the sub-human Islanders) but that's still a trying trek with two sets of back-to-backs.

After that brutal trip, February is even worse: 8 road games to 4 home games including five of a six game trip that ends in March.

But, hey, look on the bright side, the schedule makers set aside an hour and a half for the Ducks to play with themselves on April 2: 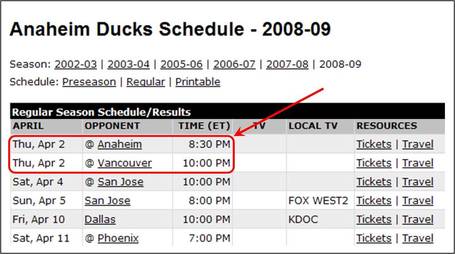 Priceless analysis you TOTALLY couldn't make just from looking at each team's schedule:

The Stars clearly sport the cushiest schedule of the three teams. Both the Coyotes and Ducks have some pretty serious gut checks and Anaheim's are pretty ill-timed considering injuries and their semi-malaise.

It might be ridiculous to say this, but after looking over these schedules it would be pretty shocking if the Stars are the odd team out. Judging from a few of those stretches, either the Ducks or Coyotes will probably slip into on-the-bubble or perhaps even draft lottery status.

Based on the Coyotes combination of rough road ahead and awful road record, my guess is that the Sharks, Stars and Ducks once again represent the Pacific division.

What is your take, fearless readers? Are the Coyotes and Ducks as good as effed? Will the Stars continue to underwhelm and miss the playoffs? Could it be that only ONE of the three will make it to the post-season?

Will the Ducks, indeed, play with themselves on Thursday, April 2?