Frolov and Kopitar are going to play together.  Awesome.  It's weird, they've been on the same team for the past two years and haven't played together but for a few preseason games in Kopitar's first few games.  I really like the idea because nothing else seems to be working so far, and I'm also pretty sure that Kopitar and Frolov would work well together.  Kopitar's best attribute used to be his ability to enter the zone and get a shot, while Frolov is best working the corners; put those two together, and I think some magic could develop.  Wayne Simmonds should work with that line because he won't have to carry the offensive load like he's had to when partnered with Frolov and Handzus, plus he's pretty good in front of the net.  The line will probably play against Getzlaf's line tonight, while Handzus' line gets secondary defensive duty against Brendan Morrison.  If you figure that Stoll's line will play against Pahlsson, it's likely that the only scoring will be done by the top lines.  Should be exciting to watch.

I like the idea of Handzus' line helping out on the defensive end while Jarret Stoll's line helps out offensively.  The only thing I want to see (you can probably guess already) is Moller in Kyle Calder's place.  I'm pretty sure people think I hate Kyle Calder or something, but I really don't; I just think he kind of sucks.  Put him with Brian Boyle and Raitis Ivanans, though, and I think he can do some good.

The Kings have had a lot of trouble scoring recently: since their Finals Week in the middle of December, they've scored 19 goals in 10 games.  That works out to (let's see, carry the one...) 1.9 goals a game.  That sucks.  Nothing else has seemed to work out so far, so why not Frolov and Kopitar?

Here's a picture of Parros from Tuesday's game: 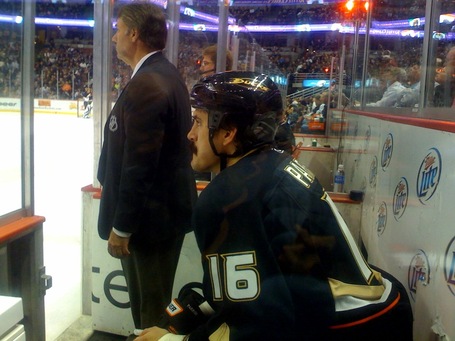 Parros' moustache has gotten a little out of control.  He looks like Cy Tolliver.