(Note: there isn't any local TV coverage for tonight's game, but NHL Center Ice is still on free preview through Oct. 24.  Hooray!  No Hayward!)

Meanwhile, little man Andrew Ebbett has been put on waivers -- we'll know sometime today if and when he is claimed by another team -- otherwise he's demoted, I guess.  I suspect he will be taken [EDIT 11 am -- he's a Blackhawk.] -- he was useful last spring as Teemu's centerman after B-Mo proved insufficient, and he's got a minuscule $487,500 cap hit this season, lowest on the team.  And he's enjoyed impressive stretches -- over the final 13 games of the regular season, when the Ducks went an impressive 10-2-1 to narrowly qualify for the eighth seed, Ebbett was particularly effective: 4 goals and 6 assists over the stretch.  Then again, the next 13 games were the playoffs, and his 1g, 2a was a bit underwhelming.  Still, if you've got a speedy-passenger spot to fill among your top six, Ebbett's an unbelievably affordable option. 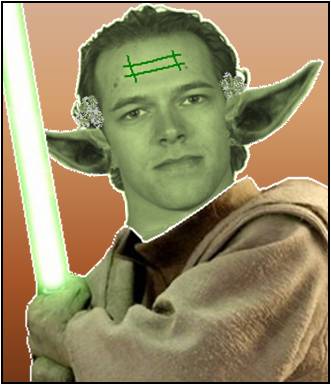 If he's cheap and can be useful, why aren't the Ducks using him?  I wrote a post about this on August 25 -- Season Review: Andrew Ebbett -- Odd Man Out? -- where I wondered where Ebbett would fit in on this year's team with the arrival of Saku Koivu.  It seemed to me that Ebbett wasn't likely to crack the top six, didn't have the makeup to be a bottom-line grinder, and would be especially squeezed because of the Ducks' need to dress penalty-killing forwards (plus an obligatory moustache).  And so far, it's seemed to come true -- Lupul, Nokelainen, and Christensen have been utilized as top-six options ahead of Ebbett, and as a result the little guy has only appeared in two of six games and played spare minutes.

Battle of California: so far, 41% geniuses!

So it seems the best options for Ebbett at this point are another NHL team or a return to the AHL (or whatever -- Ducks don't have an affiliate this season) -- he's a UFA next summer and won't have an opportunity to earn much of a raise in Anaheim's pressbox.   I do have to wonder if Ebbett has any trade value -- not terribly significant, but I imagine cheap forwards are some form of GM currency -- but I won't raise a fuss.  Waivers seems the easy way to give Ebbett a Bryzgalov-style chance to earn a spot on one of 29 other teams, an opportunity he definitely deserves based on his fill-in utility last season.  Or alternatively, nobody will claim him, he'll get demoted to some random AHL team, and I'll stop pretending minimum-wage forwards have trade value.

Feel free to leave your own thoughts or questions on the little guy in the comments.

Perhaps Andrew Ebbett could have made a stronger case for himself if he had a place on the internet to share his frustrations.  Amazingly, the Anaheim Ducks now have two player-bloggers, and both have made decent starts so far.  So please be patient with George Parros' punching hand -- he learned a tough lesson in Minnesota and didn't replicate it last game.  And yes, somebody do the honorable thing and return Joffrey Lupul's putter.

Prediction: Blues are still looking for their first win in front of non-Swedish people.  Ducks 4, Blues 1.  Goals by Ryan, Selanne, and the two bloggers -- Lupul and Parros.  Eric Christensen gets robbed on two occasions, but does get a sheep-shat coupon for a nice mattress discount.