Ducks Gameday -- Sing me a Song of Misery

Share All sharing options for: Ducks Gameday -- Sing me a Song of Misery

(Alternatively titled: "BoC Gets Even Dorkier")

Stupid Ducks -- Bottom of the Pacific.  Shut out in two of the last three games, 1-2 at home, terrible on the penalty kill, awful in first periods, and the second-best team on the ice most nights.  Sure, 3-3-1 isn't a bad record (three points better than last year's start), but after getting murdered 5-0 by the Blues Saturday night, this is probably appropriate.

To add to that, the Angels and Dodgers both need to win three straight games to participate in the World Series -- it really is a trying time for SoCal sports fans.  And while normally I'm a guy who points out the silver lining, today I thought I'd embrace the misery through a completely hidden side of Sleek: choral music.  You see, I sing low bass in a pretty large church choir, about 110 people with a median age of like 60 (and yes, you should be making fun of me in the comments).  It's all volunteer, but I tell ya -- it's a pretty disciplined group. 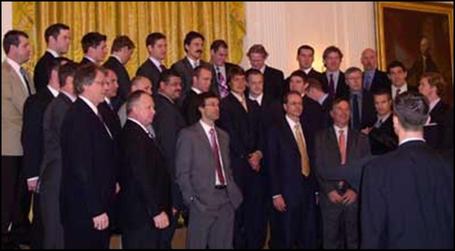 Way more disciplined than this choir, but probably less talented.

Anyways, over the last decade or so, this choir has staged a few concerts and recorded them, and I've included a few misery-themed selections after the jump.  I should note I do this without any real permission, but I suppose I have some justification -- my voice is somewhere in there.

To the rest of the BoC staff: Sorry for gaying up the blog.  This one goes out to Bleys and Baroque:

Before we get started, I am not here to be snooty about musical taste or religion -- to each his own, dude.  But as this is a church choir, there's some strong theism mixed into most of the text -- just be warned ahead of time.  But I'm not getting biblical on this blog other than for context.  As for music, I'm not really an expert -- I know enough that I could sing it.

I've chosen three songs to start off with -- all come from what is known as an oratorio, which is basically a biblical story set to music.  Each of these selections comes right at the start of each work, just after an overture -- the composers wanted to set a backdrop of hardships for each story.

First is Handel's Israel in Egypt, which tells the story of Moses rescuing the Israelites from the mighty Pharoah through a series of plagues and miracles.  In the opening, a tenor (not me) tells the story of oppression and bondage, and the choir then vocalizes the Israelites' plight.  Handel is my favorite composer to sing (sorry, Bleys); he layers vocal lines like no other -- the cries going up to God get handed from section to section.  And you feel the pain.

Now there arose a new king over Egypt which knew not Joseph
And he sent over Israel taskmasters to afflict them with burdens
And they made them serve with rigor.

And the children of Israel sighed, for reason of the bondage they sighed.
And their cry came up unto God.
They oppressed them with burdens and made them serve with rigor.

Sometimes being a sports fan is enduring bondage and rigor.  Stupid penalty kill.

The second piece is from Mendelssohn's Elijah, which recounts the story of a prophet sent by God to reprimand the people for idol worship (this is generations later than Moses, btw).  In his opening act, Mendelssohn has the choir actually voice the part of the Israelites, pleading to God during a mighty drought.  It's another well-layered piece of music, and Mendelssohn's lines really convey the urgent hunger without any end in sight.

The harvest now is over, the summer days are gone.
And yet there comes no power to help us.

Will then the Lord be no more God in Zion?

The deep affords no water,
And the rivers are exhausted.
The infant tongue now cleaves for thirst to its mouth.
The little children ask for bread,
And yet there is no one breaking it to feed them.

Sometimes being a sports fan is suffering droughts and famines.  Stupid power play.

Finally, I'm going back to Handel and Judas Maccabeus, which is unique in that it's not really biblical -- it's a story from an outside Old-Testament-era text,  I can't offer too much directly in the way of storyline or setting here other than it's much later than Elijah (we only did selections from this oratorio).  But it opens with tragic news -- Judas' father has been slain in battle.  Nothing like an opening tragedy to get things started, and again the music is well-designed.  Hey, it's Handel.

Mourn!
Mourn ye afflicted children, the remains of ancient Judah,
Mourn in solemn strains.
Your sanguine hopes of liberty give o'er.
Your hero, your friend, your father is no more.

Sometimes being a sports fan is mourning as your once-glorious team dies -- your hero is no more.  Stupid Ducks.

Now I'll admit -- I'm not really as depressed about these Ducks as these composers are about ancient Israel, mostly this is just me showing off my side hobby rather than deal specifically with how bad the Ducks, Dodgers, and Angels are playing.  But I am depressed -- this at least gives me something distracting to listen to.  If this post goes over reasonably well, I may offer some more choir songs later on in the season -- though all three oratorios begin with sheer misery, they all build up to triumphant endings of positivity.  It's quite possible that the Ducks similarly turn their season around, oratorio-like.

In order for that to happen, though, the Ducks need an Elijah to slap them in the face, a Judas Maccabeus to inspire them to action, and a Moses to lead them to the promised land.

Prediction: As I noted in the last gameday's comments, the key appears to be Nick Boynton.  Ducks are 3-0-1 in the four games he's played, averaging 3.5 goals per game.  In the three games Boynton's missed, Ducks are 0-3-0 scoring one goal TOTAL.  If he plays, Ducks win 3.5 -2.3 tonight.  If he sits, Ducks lose 0.3 - 4.  Goals by Judas Maccabeus on a nice "part the Red Sea" pass from Moses (linemate Elijah gets a cheap second assist from his fiery chariot).