The Cannon gets farther with chicks than most bloggers.

Her: What do you do?

Him: I write for The Cannon.

Her: Really? What is it?

Him: It's a blog about the Columbus Blue Jackets. 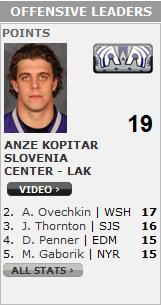 That's not going to last, but it's nice to look at. Seriously, how well is Anze Kopitar playing right now? Against Dallas Anze had a hat trick and then followed it up with a Joe Thornton hat trick (3 assists), while also drawing 2 penalties. He'll probably be named the #1 star of the week with 7 points in 3 games (4 goals, 3 assists). He's back to where he was his first season, where he suddenly created opportunities for himself that put defensemen in impossible situations. He turns them Kopitarded, you might say. (Wait, I say that.) I'm positive he'll slow down at some point, but how much? I was hoping for 80 points out of Kopitar; now, I'm thinking 90 may not be out of the question.

And the crazy thing? Anze's on pace for 143 points. That's 72 points less than Wayne Gretzky had in his best season. If Wayne were on our team at that pace he'd have 29 points right now. Jesus Christ, Wayne Gretzky was good.

In other news, Ted Purcell is really screwed. Scott Parse played his first NHL game yesterday and did very well, notching his first point (a great assist on Jarret Stoll's second goal) and more importantly showing good defensive responsibility and nice work along the boards. I thought Purcell wasn't bad yesterday (he drew a nice penalty when the Kings were on the power play) but he hasn't been showing the jam Terry Murray wants and he was replaced by Peter Harrold (of course) at the end of the game. When Justin Williams comes back either he or Meat Train will probably take Purcell's spot on the third line. Hopefully Purcell can stick on the 4th line, where a Richardson-Purcell combo would work really well, but I have a bad feeling he's probably going to get sent back down. That would probably spell doom for Ted Purcell's future with the Kings.

The Columbus Blue Jackets beat the Anaheim Ducks last night so the Kings should get their back-up goalie, who is, let's see... oh shit. Mathieu Garon is going to play tonight. You are going to see more unnecessary splits by Garon and Quick since the last time you watched Time Cop. And watch, Garon is probably going to shut us out.